Nobody ever learns how to write a Facebook post, they just do it. Now you can do it better than everybody else.

Working in the B2B realm, Facebook isn’t exactly our go-to resource for getting social media traffic. Sure, we use it to help with SEO and some of our content does get passed around, but it doesn’t generate new leads, or downloads in the ways that LinkedIn and Twitter can. That’s natural, I’m fine with that.

However, I’ve been lucky enough to spend time managing several of our clients’ B2C social media accounts and have been fascinated at which types of Facebook posts perform best, and which ones tend to lose. After hundreds of little tests and tweaks over the past year, here’s what I think every Facebook marketer can do to start improving their Facebook posts.

The first thing to wrap your head around when learning how to write a Facebook post for business, is that most posts are made up of four very important factors that can elicit likes, shares, comments and clicks all on their own. Nail any one of them, and you’ll increase engagement. Nail all of them and you’re Babe Ruth.

Here’s how to write a better Facebook post in five ways, using the power of all four parts:

The one thing that hasn’t changed in years about the Facebook algorithm, is that when one post performs well, the ones that are published afterward will get seen by more of your fans. If it performs poorly, your following posts will be seen by less people.

If you’ve started to notice your visibility trickle down, it could be because you’ve been posting links non-stop for a while. When’s the last time you posted a photo, or something that wasn’t a direct link to your site?

When you have 140 characters, or an even shorter email subject line, all you want people to do is click. And in order to get people to click, you need to write short, quippy lines. On Facebook, the opposite is true. For one client, I started taking the largest nugget of information from an article, and using it as the body copy of the Facebook post. Here are the results from my first A/B test:

For a few days after, I’d start with the short post, and after a few hours of it getting little to no traction, I’d update it to the longer version and it would skyrocket to 15, 20, 25, 30 shares and likes. At this point, they don’t test anymore, they just use the long version and 15-25 shares and likes has been typical, although we do have the off days once in a while.

I’ve been replicating this method with other clients and the results are the same. When you think of it, the psychology is simple: if you give away something really interesting, they’re “liking” your snippet. You’re giving them much more than a title and featured image to like. And people are bored of the one-liners. People share, because they’re sharing the great info you just passed along to them.

Thinking, “yeah, but, do they click?” Yes they do. And they comment. You get the SEO benefits of a highly shared Facebook post, plus you’ve increased your reach on an article, which results in more clicks back to your site. Within the first month of adopting this strategy, traffic from social increased 197%.

3. Tell people what you want them to do. Every once in a while, if you want people to share a post, just say so. Several of the posts that came before this one had a few shares here and there. Usually just one or two, or none. Then this post came along, asking fans to SHARE it with everyone they know, and BAM, 56 shares. That increase is no small potatoes. 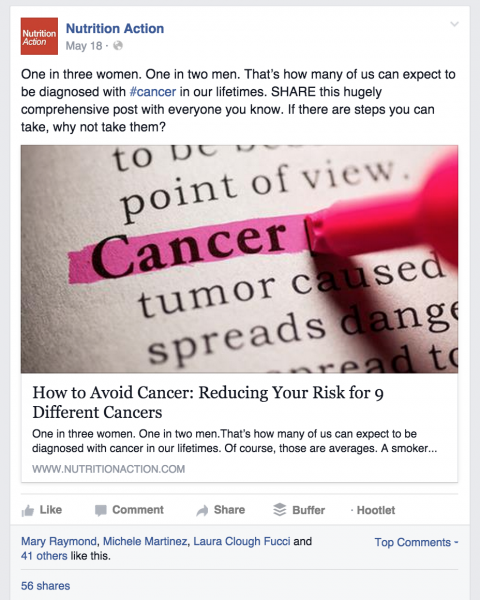 Six months ago, hashtags wouldn’t have sent a single extra click your way, but the tides have changed, and people are using hashtags regularly on Facebook now. Posts with hastags have not only increased in visibility, but also in likes, comments and clicks due to that visibility. If I ever forget to use a hashtag, there’s an obvious difference in likes, immediately. Tagging other Facebook pages (if you mention them in an article) also helps with easy likes and shares.

5. Choose stock images wisely, and design them yourself if you can.

Your featured image is now huge in the timeline. Most scrollers will see it before they even see your title, so in many cases it could be the first point of contact since we all process images faster than text. Additionally, a good graphic can illicit a “like” or “share” all on its own. If you have a designer in-house for your magazine, pull her into your social media efforts to see what can increase clicks.

Oh, you wanna spend a little dough? Cheater! Just kidding. So far, Facebook has been my favorite social media ad network. It’s cheap (as low as $1) and it’s flexible. You can decide you want to promote a post for $1 a day for 7 days, only to specific types of people. Or you can spend $50 a day to boost a post and get seen by a larger audience that you choose. It’s simple to test out because the ad budget can be so small.

The only caveat with Facebook ads, is that you can’t use images with text in them as your featured image. This doesn’t come up often, but when you want to promote a free report, you won’t be able to use the cover as your featured image. The image can only have 20% text, according to Facebook, but I’ve been denied for images with text that have much less. So you’re better off just choosing a really interesting image.