Remember the days of putting your paid Facebook advertising budget money into a massive digital marketing black hole, because the ad targeting only allowed you broad audience options?

Well they’ll soon be faded from memory like a bad dream…since Facebook rolled out their new flex targeting, which will help niche magazine publishers produce more effective ads that have more targeted reach and where ad clicks aren’t wasted (or, wasted less).

If you invest in a PPC partner then you may know that the flex targeting feature has already been available through the Facebook API and in third party software for some time, but now it’s open to the general public for all you DIY niche publishers (and I know that’s a big group of you / us!)

Here’s what you need to know about the almighty social network’s new ad targeting and its huge benefits.

If you’ve been using Facebook Ads to quickly boost a post, then you’re probably used to working with Facebook’s targeting tool where you can pick and choose bizarro words, topics and titles that may apply to the people who read your content. Unfortunately, as far as I can tell, nothing has changed there.

The new detailed targeting feature, available right now only in Power Editor, and the “flex and-or” function, allows you to specify your ad targeting by selecting two additional consumer demographics, interests, or behaviors and excluding another one.

You’ll find that the Demographics, Behaviors, and Interests target options are now in the Detailed Targeting section.

But after you set up your basic demographics the fun really begins.

By scrolling through options or searching with keywords, you can include the additional audience demographics, behaviors, or interests for an added level of specificity.

For example, if you’re an automotive magazine, you may have been choosing “cars” as an “interest” of the people who you want to see your ad. You can also choose many more interests, which has never been limited.

However, now, for a second level of audience targeting you can choose to exclude an additional demographic, behavior, or interest.

As a niche magazine publisher you know that the more targeted your paid ads are, the better.

Instead of using the money in your advertising budget to reach a broad audience, to most of whom your ad will blend in as much as a Candy Crush Saga ad will, you have much more control. Having your advertisements in front of more targeted audiences means an increase in traffic, sales, and subscriptions.

An additional level of control that comes with Facebook flex targeting is the better performance analytics that will result. Since you have a more specific idea of who your ads are actually reaching, now you can more accurately gauge how campaigns perform using a number of metrics including cost-per-click and click-through-rate. You can also recalibrate your future efforts to maximize traffic and subscription conversions.

The “But No One Else Would” Technique

When learning about flex targeting, I picked up a smart technique from Digital Marketer called the “but no one else would” technique. It’s all about specificity and I think you’ll find it useful.

You might think creating an ad and targeting Facebook users with an interest in Tiger Woods makes sense, but let’s be honest, Woods is a household name and just because a person shared an article about the Tiger Woods scandal at some point, “liked” him, or mentioned him, does not make them someone who would subscribe to Golf Digest.

How about Phil Mickelson? Bigger name, and not as well known, but anyone who has watched the Masters would know him, so still not necessarily an avid golfer or someone who would like to receive Golf Digest on a monthly basis. 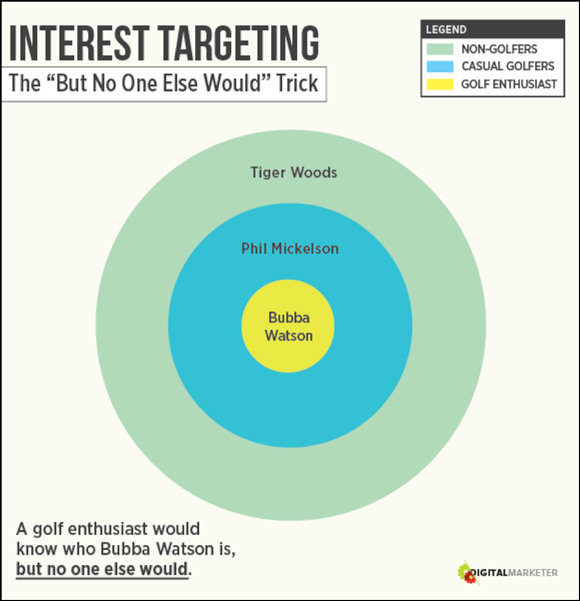 And the great part about flex targeting is that you can still target people interested in Tiger Woods, as long as they’re also interested in Bubba Watson. I’d highly recommend reading their post with all the different ways you can use Flex targeting.
Have you tried Facebook’s flex targeting feature yet? Let us know what you think in the comments. Are you getting more clicks, likes and shares from more targeted audiences?