Everywhere I turned Monday, there were rumors and speculation about the big iTunes announcement. It was all over WSJ, New York Times, TechCrunch and Mashable. What caused all this commotion? Here’s what Apple.com looked like Monday, November 15, 2010: 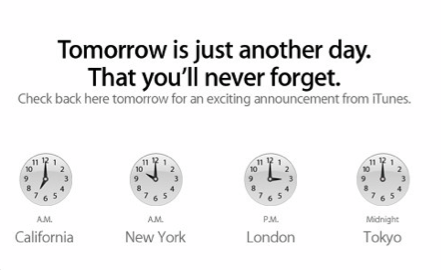 In case you haven’t heard, The Beatles are now available on iTunes. Here’s what Apple.com looked like Tuesday after the announcement:

YAY! My love for The Beatles must come from dad, since they peaked before my time. And I am happy to share this with my children, who also love good music. It will be even easier now that I can download The Beatles right onto their iPods.

What really amazed me about this whole announcement was how much buzz Apple created in 24 hours. It seemed every newspaper, blog, tweet and status update I read on Monday mentioned it. I mean they really got the word out. How’d they do it?

First, the cryptic message on their homepage Monday sent news and media outlets in a tizzy about what Apple might announce – Will they integrate with social media sites? Maybe an iTunes software redesign? Did they finally get The Beatles catalogue? There were many speculations. Then it went viral, all over Facebook and Twitter.

Tuesday morning the official  press release went out and the world was informed that The Beatles could be found on iTunes.  Once again, news and media outlets wrote about it and social media spread it around.

This is not really a new media trend, this is Internet marketing at its best.

What do you think about Apple’s marketing strategy?  Share your thoughts below…

UPDATE:  The Beatles are once again topping the charts – the iTunes charts that is! Seven of the top 20 albums, as of today, are by The Beatles.

Michelle, You pegged this as an “internet marketing” story but isn’t really an “integrated marketing” story? When you look at where Apple puts its marcom resources including physical stores, TV, print, traditional PR etc. and you look at the results don’t you have to conclude that the preponderance of power is coming from non-net marketing?

Apple seems to understand media economics – the increasing returns to scale in information make big stories more profitable for media outlets – Apple leverages that fact for themselves by inducing media to pile on to their orchestrated stories.

Sure, pay you can pay Apple if you want, or you can just download all of the songs for free.

One of the fascinating parts of this story is how iTunes turned a deficit– the lack of one of the most important products– into a positive story. If they had offered Beatles tunes from the start, there would have been no publicity here. And there’s no sign of any kickback with “What took them so long?”

I bought the boxed set yesterday..

A great example of using a website as an event epicenter.