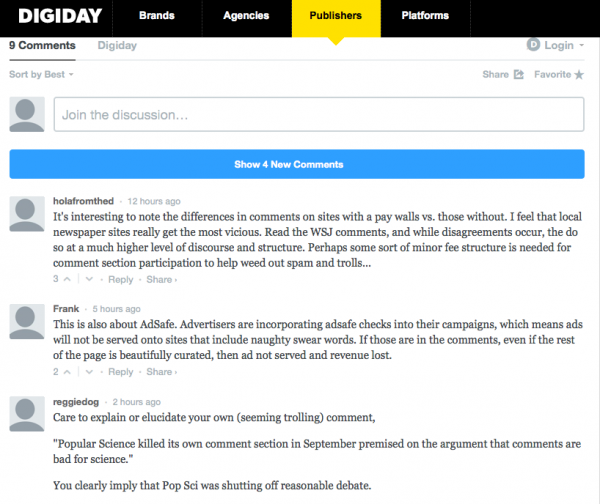 Are comment sections as we know them an endangered species?

Digiday reports that fed-up publishers are being proactive in addressing what for many are the scourge of the Internet. Some, like Popular Science magazine, have ditched such features altogether, while others are attempting to reshape them. The Chicago Sun-Times, for instance, has shut down its comment section until it can devise a more, shall we say, pleasant system.

“There’s got to be a better place we can offer people to interact without comments taking away from the article or denigrating the people who are reported on,” Sun-Times Managing Editor Craig Newman told Digiday.

Newman might look to publishers like Gawker Media – with its proprietary Kinja program – and The Huffington Post, which in recent years has placed stricter controls on commenters.

“We’ve seen a marked [decrease] in the number of fake accounts in our system,” HuffPo‘s Tim McDonald told Digiday. “It’s also helped with getting more quality comments and positive conversation as opposed to criticisms or insults.”

To read more about the future of comment sections, visit Digiday.