Even before the Internet took over our lives (and I mean that in a good and bad way) there were marketers who made a great living offline promoting their products and consulting services.

One man, speaker/copywriter/bigtimemarketing consultant Dan Kennedy, was someone who took this “old school” knowledge and parlayed it into a strong cyberspace presence. I’ve studied Dan Kennedy’s work and he has greatly influenced a plethora of online marketers as well as many brick-and-mortar businesses who have produced a strong ROI for themselves.

Dan has said on a few occasions that he’s not a fan of the Internet, and I believe he has said he knows nothing about computers. BUT I am pretty sure the folks on Team Kennedy do. And they do an excellent job for him.

Here’s an interesting aside. I listened to an old cassette program of Dan’s called Mega Speaking… circa 1994. In it, Dan briefly mentions “The Internet” and some bulletin boards, but at that point in time, didn’t think it would amount to anything as far as creating a profit center for the speaker. Whew! I guess times have changed, haven’t they?

FREE White Paper: Learn how to optimize every page on your site by downloading our FREE 12 Master Landing Page Templates white paper. For even more on landing pages, download our FREE Landing Page Handbook and our Rapid Conversion Landing Page Optimization that Sell white paper.

The Most Incredible FREE Gift—Ever!

From Dan Kennedy
The “Millionaire Maker”

$799.89 Worth Of “PURE” Money-Making Information Yours Absolutely FREE… if you are one of the FIRST 253 people to take me up on my outrageous offer!!!!

Remember: your headline is your “ad for your ad” and it should a) create curiosity or b) deliver a major benefit to the targeted audience/prospect, and c) produce urgency to move the prospect to action NOW. Lucky for us, Dan has incorporated all three quite well into this very compelling headline. If you study this man’s work you’ll discover that he has his own style of creating headlines/sale letters. And when you read his sales offers, you’ll know immediately what I’m talking about.

So let’s break it down: Dan zeros in on his targeted audience. Not flower lovers, not dog lovers, but folks who LOVE money-making information for their business.

He accomplishes his goal by bribing them with the most effective phrase in the human language to get someone to take action—short of saying, “Freeze, or I’ll shoot!”

What is it? It’s FREE gift! That stops the prospect, because who doesn’t want something for “nothing?” NOW, if you’re wondering what the “catch” is for getting the FREEBIES, and you’ve heard of Dan Kennedy, THEN you’ll immediately be put at ease that this is on the up and up. As human beings we have our guard up against the “to good to be true” syndrome.

Dan creates specificity with not $700 worth of BONUSES, but $799.89 (perceived value). BUT here’s how he creates urgency: it’s only available to the FIRST 253 people who are savvy enough to take action now.

Of course, we don’t know if he will really cut it off, but who cares? Dan is using scarcity perfectly.

Dan doesn’t mince words… no story lead or statistics. The man is a meat-and-potato type of copywriter and gets to the point. What you see is what you get. And here we go: a cornucopia of information that’ll make you richer. The copy immediately raises any objections you have, such as…

“OK, Dan why the hell are you giving me all of this?”

And he tells you why—and in the process informs you that he is shamelessly overwhelming you with all this free potent and valuable information so down the road you can’t live without him and are “Kennedy-ized” into a worthwhile protégé/subscriber for years to come. The big offer here is to test drive his inner circle membership for three months. Kick the tires, try his techniques.

Once he’s made you money, Dan is going to charge you on the fourth month to become a paying member of his elite inner circle, and who doesn’t want to become a member of an elite club?

How can Dan afford to do this? Simple: it’s called a loss leader—and I am quite sure he will make it up on the backend when you buy his books, tapes, consulting services—and of course, join his continuity/inner circle program!

NOTE: I have gotten Dan’s information and it’s quite effective in the way that he gets you to think “outside of your business” in a way that your competition doesn’t.

This landing page is one that would work offline as well. It’s simple in its design and doesn’t want to confuse you. In a nutshell: it’s the ultimate lead-generation letter on steroids. No fancy links. It has one that goes to a very important page: the order page. Dan’s reasoning is succinct: “You’re going to get all of this… and in return you’re going to give me this: your important OFFLINE and ONLINE information.”

That is the whole basis for this landing page, to get you to give your email address PLUS offline contact information. Now Dan lays on benefit after benefit to the point that you’d have to be a fool NOT to spend at least $19.99 to pay for the shipping. I believe Dan, whose mantra is “test, test, test,” has done just that with this offer.

He also doesn’t waste his time with getting folks who are “tire kickers” and just want freebies. He doesn’t want folks who don’t recognize the value in his information. When you’re a guru like he is, you can afford to do that.

This site doesn’t capture the email address for an auto-responder follow up. If folks click away, they click away. This hard-nosed marketer doesn’t want this type of subscriber. Although I do wonder what the response would be if he captured the email address anyway and followed up again, later.

This is a site that strategically places testimonials throughout the copy and uses them exponentially. One is from Yanik Silver. Any online neophyte or experienced marketer should know about Yanik Silver. He’s a young phenom who’s made millions online, (who, by the way, has a strong offline background in direct response advertising). I imagine Dan placed him first for that reason.

Make no mistake: Dan understands the power of the Internet. He also knows that to be continually successful you have to use offline techniques, especially if you’re a professional with a client base (doctors, lawyers), or if you’re a local retail brick-and-mortar establishment.

I know this is true because once you sign up for Dan’s offer online, you’ll get LOTS of hard copy goodies in the mail from him. Dan believes that you should never, ever rely on only one type of marketing. If you do place a bet on one pony (the Internet) as a delivery system for your business, then you’re leaving too much dinero on the proverbial table.

Also note that Dan is not selling himself as just another Internet Marketing Guru. So much so, that he strategically uses specific testimonials from industries outside of the Internet that hit “his” targeted prospect’s hot buttons. There was some inconsistency here with the way some testimonials had photos next to them and others did not. Also, a streaming audio or video might help response, too. 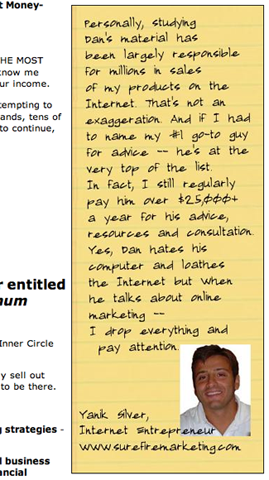 Testing has proven that placing order buttons throughout a sales letter should give you a better response—If your copy has done a good job of selling. Listen: some people like to read, some people don’t. If they “get it” and want to order now, then give them the option. Dan accomplishes it here.

7. Labeling and Language – A

A master marketer and copywriter who sold millions of dollars worth of goods and services should certainly know how to speak to the common man, and Dan does. He’s honed his “one on one” personal voice down to a science. The language here is easy to understand.

This is a long sales letter that uses just the right amount of graphics (which were used only with testimonials) with its sales copy. Not to mention the use of personal, handwritten graphic versions of these testimonials. This was done, I imagine, to show proof that the testimonials were real—and that these folks took the time to handwrite their testimonials. (whether they did or not).

This is a static “name squeeze” site. I don’t believe it will change much, and I don’t believe folks will come back to see if Dan will offer other freebies. Dan uses (as stated earlier) the technique of urgency, saying that he is ONLY going to give these freebies out to the first 253 folks.

That being said, we don’t know if he’s hit that “magic number,” the first lucky 253. But, if he set a deadline, say April 29th, then after that deadline had come and gone Dan would’ve had to change the offer, or take down the page.

Using the particular number of people makes the accountability more ambiguous. Although I do wonder why Dan didn’t use $799 worth of FREE Information going to the first 799 people that respond. Who knows? Maybe next time he will. (Or maybe I just gave him an idea.)

Loading time was well within the 15 seconds the Mequoda guidelines recommend.

Dan believes that “Copy is King,” but I was a tad disappointed that he didn’t use more graphics as far as showing the actual CDs, or perhaps a group photo of his Inner Circle Comrades-In-Arms. This would be a more powerful inducement to send away for his freebies. Could it hurt that the site under-uses graphics? Again, only testing could tell. Could it help? You be the judge. I also would’ve included a photo of Dan right in the beginning, so you can see this guru’s non-smiling face.

(When Dan was marketing a large bootcamp recently, he certainly went all out with his offline marketing and used lots of graphics in his brochures.)

The order options are placed where they should be—throughout the copy—so when the prospect has made his decision to sign up, he can be taken there immediately. Works well!

Overall, this lead-generation site worked for me. A powerful, strong offer, with benefit-laden copy, plus effective use of testimonials equals success!

Wonderful paintings! This is the kind of information that are supposed to be shared across the web. Disgrace on the seek engines for now not positioning this post higher! Come on over and visit my web site . Thanks =)

I found this page fascinating.

one point is, I don’t think it is a “loss leader” because since the value Dan Kennedy is giving is really the information, the stuff you get physically in the mail costs Dan (Bill Glazer, actually) much less then twenty bucks- so it’s profitable from the get go.