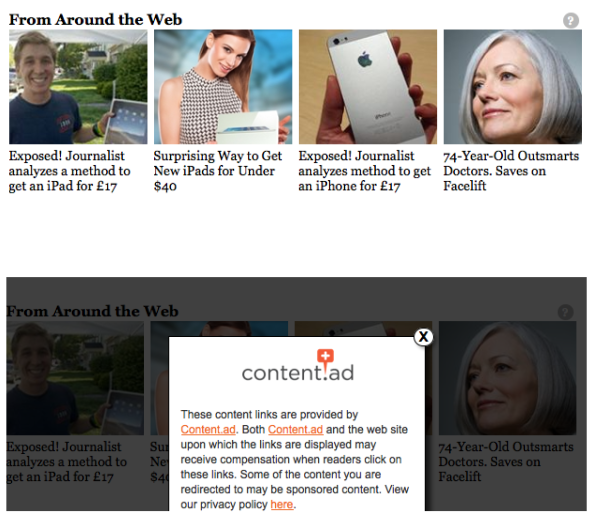 In the wake of the Advertising Standards Authority’s recent ruling against Outbrain that forces UK publishers to more clearly label their paid content, several have come up with new ways to do just that – sort of.

Digiday recently took a look at the UK’s The Independent, Forbes, and others.

It was placement in The Independent that got Outbrain in trouble to begin with. The former has changed its You May Also Like and From Around the Web labels for paid content to Promoted Stories.

“We always make best efforts to clearly label any commercial areas of our website, and our labeling was in line with the best industry standards,” a spokesman from The Independent recently told the Guardian. “From today we are happy to mark these links ‘promoted stories,’ in accordance with the ASA’s new suggestion. The ASA’s ruling was against Outbrain, not The Independent.”

Curiously, Forbes in the UK includes a gray-shaded circle with a question mark with paid content to disclose its relationship with the provider. A click from readers takes them to a “vaguely worded caveat about the origin,” Chris Smith writes.

To read more about content recommendation labeling in the UK, visit Digiday.