Five fun facts about the Apple iPad and digital magazines

When we launched Blue Dolphin Magazines in September 2000, our state-of-the-art online magazine superstore went live with about 300 titles. It took more than a year for us to reach 1,000 periodicals for sale, and we topped out at around 1,400 after 18 months.

As I make this post, apples iNewsstand offers consumers 1,165 titles. I started keeping track of the number on Thanksgiving and have watched it climb by about 100 new magazines per week. To be fair, there are newspapers and newsletters in that number. But far and away the bulk of the titles are magazines.

Living through the revolution

I have been a magazine guy pretty much my entire adult life. It all started with Boy’s Life when I was about eight. I sold magazine subscriptions door-to-door when I was in middle school. I was the editor of my college magazine and wrote my senior thesis on the growth of regional magazines in America. While I love writing for its own sake, I take even greater pleasure at being part of a team that includes other writers, editors, designers, photographers, videographers, programmers, project managers and all the technical and business folks that make up a modern magazine publishing team. 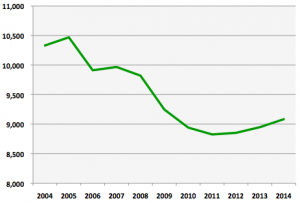 While the digital revolution has allowed other media to both market and distribute their product digitally, until recently magazines could only use the Internet as a marketing channel. I can still recall the questions from venture capitalists back in 2000, which went something like, “so let me get this straight, you’re going to use the Internet to sell print magazines?” Apparently the answer was good enough to get us $34 million in funding for the venture. By 2003, we realized we needed to sell digital magazines and merged with Zinio. But delivering digital magazines on laptops and desktops was not the in game, either. For digital magazines to go mainstream and replace print magazines as the preferred distribution format, we needed a device that offered users a magazine experience. The device needed to be portable, full-color, and connected to a giant magazine superstore. We had only the superstore. The Apple iPad and its imitators have completed the equation.

As of late 2011, The Economist reached 100,000 digital-only subscribers with iPad users accounting for the bulk of the audience.

It seems clear that magazine publishing is being reborn. There will be chaos, opportunity, massive change, and many winners and losers. While consumers currently favor simple replica and replica plus editions, it seems likely that elements like video, slideshows, and interactivity will become part of the magazine consuming experience. With that said, everyone who loves magazines and produces them should think deeply about what makes magazines unique as a medium. With books, television, and websites proliferating and competing for consumer time, it is critical that we understand and embrace the uniqueness of magazines. To spur your thinking, check out this list of digital magazine attributes we published way back in 2010.

If you’ve got a digital magazine or an Apple fun fact to share, please add it below and share it with the Mequoda community.

Oh, and another report I read recently predicts there to be 82.1 million US tablet users by the year 2015. This number, according to Forrester, is one-third of US online consumers.

One interesting thing I’ve found is that the 4.2 million iOS activations on Christmas Day was about 1.6 million more than Android.