Digital magazine shopping would be much more fun, fast, and efficient with a few simple upgrades to the Apple Newsstand app

Like any good industry analyst, I love looking at numbers. More than that, I love extrapolating trends and directions from them. Here are a few recent observations:

Media Finder, the online version of the Oxbridge Standard Periodical Directory, currently lists more than 50,000 US periodicals including magazines, newsletters, newspapers, and a number of other specialized formats like journals, looseleafs, tabloids and reviews.

As I write this post Apple Newsstand currently lists 1,369 periodicals available for sale. It’s pretty easy to imagine that number growing to 20 to 25,000 over the next couple of years as tablet computing goes mainstream on a global basis. 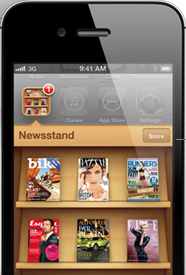 To help shoppers navigate what will soon be thousands of publications, I’d like to see three simple enhancements to the app’s functionality.

Search: First, I’d like to see Apple add a robust search feature to the app, which would empower users to quickly find their favorite periodicals by title, subject, and keyword phrase. While it would be great to have a newsstand search function that combs through periodical product descriptions and issue content, I’d be happy if it just used keyword tags assigned by the publisher to get started.

Categories: Next, I’d like to see Apple introduce a few hundred categories like travel, cooking, investing, news, business, etc., and allow publishers to assign their magazines, newsletters, and newspapers to up to five categories. I fear that allowing more than that would defeat the purpose of having categories in the first place. I understand this project will take some real thought in terms of which categories to include and which categories to leave out. Personally, I’d pay big money for a ticket to watch that process come down inside the Appleplex. Heck, I’d probably pay more if I could participate.

Language: While it’s really cool to see magazines in dozens of languages, it’s unlikely that I’m looking for a title not published in my native tongue. I think this navigation feature could best be handled as a pulldown setting that each user could see and change, but would default to the same language selected in the iPad set up process. Perhaps the most exciting byproduct of digital magazine publishing is globalization. I’m currently working with publishers in five different countries who are all focused on the 1.3 billion people who speak English around the globe. While this may seem heady for a US publisher who has historically been limited to a population of about 300 million, imagine the excitement of an Australian publisher whose market heretofore has been about 25 million.

While I’m incredibly thankful to the people at Apple for the iPad and Newsstand, I have high hopes that the Newsstand app will soon see some sorely needed upgrades that will be greatly appreciated by digital magazine consumers around the world.

If you have other suggestions for improving the functionality of the Apple Newsstand app, please post a comment. Who knows, you might score a ticket to the Appleplex, too.

Over the coming weeks, I will be posting a series of articles on producing, placing, pricing and promoting digital magazines. If you’ve seen a brilliant best practice that you’d like me to include in those posts, drop us an e-mail or make a comment here.

Hi Don: Great article! Do you want help getting it in front of Apple?
Best, Lisa