And right before last week’s big Facebook announcement, Kafka predicted that Facebook was “still selling the sellers, trying to convince them to send real money — Google-sized money, or better yet, TV-sized money — their way.”

All this speculation, and the proof that advertisers are in fact spending money with Facebook didn’t actually prove that Facebook ads worked, though. All it proved was that advertisers were willing to throw advertising dollars at a new, wildly popular platform, to see if clicks translated into revenue in the same way that Google AdWords do.

What Facebook’s new plan to integrate ads into the news feed did prove, is that the lack of monetization on mobile devices was a real blind spot. See, with the gargantuan update of Timeline, there left little room for ads on the mobile and app-version of the website. With 425 million mobile users (and counting), that’s a lot of lost revenue. From the outside, the Timeline update might have looked like a misfire, but the truth is that the advertisers who currently host fan pages on Facebook just got a heck of a boost with the new “Brand Pages” which support the new advertising effort.

With the new Facebook brand pages, there are a few notable changes. Beyond the obvious visual differences, there are lots of new customizable options. Here’s what our Mequoda Facebook page looks like in Timeline View. In terms of design on the new Facebook brand pages, a nice feature for publishers is the ability to customize what used to be “tabs”. These tabs now hang front and center right below your featured image. For Mequoda, we’ve decided to showcase our blog posts, free ebooks, and a landing page built for the Mequoda Summit. The content on these “tabs” can  now be 810px wide. 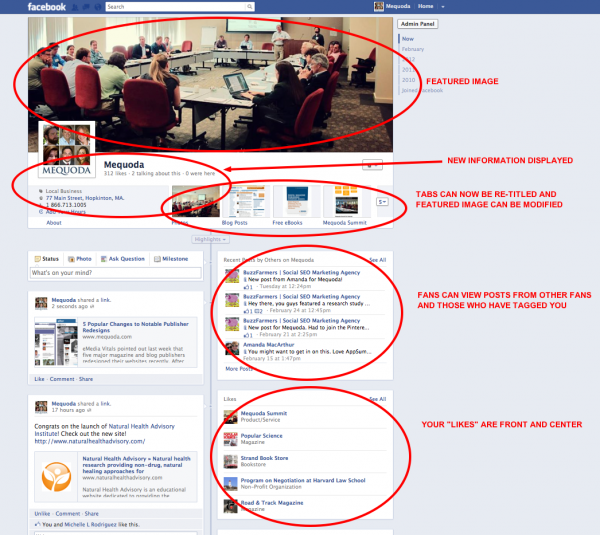 Most notably though, in terms of advertising, the ability to turn a status update, photo or video into an ad is an upgrade. Whereas in the past, these updates would have the hit or miss chance of being seen in the newsfeed, now these ad placements would guarantee to show up. Besides, we already know that contextual text ads tend to work best. That’s the Google Adwords claim to fame. With the ability to turn a post into an ad, the pressure for making stand-out ads is removed. After all, standing-out isn’t always the best method. Blending in contextually might work just as well in Facebook as it does for Google.

They’re even offering larger brands a new (monthly retainer-based) tool called Reach Generator which gives the advertisers 75% guaranteed reach. According to Inside Facebook, “The company said that test partners, including Ben & Jerry’s, were able to reach 98 percent of their page’s fans using Reach Generator, a massive increase over the 16 percent of fans that Pages, on average, reach without ads or Sponsored Stories.”

The biggest drawback? Those automatic “welcome” pages are no longer going to work. At least as far as I and any other analyst can tell, anyway. You can make that welcome page a featured tab with a more enticing title to get people to click, and then like your page, but that’s about it.

So how about you? Have you started working on your brand page yet? What features do you see as the most meaningful for content marketers? Will you be increasing your Facebook advertising budget?

Rob, Facebook’s targeting has improved drastically, might be worth another shot while ads are still cheap(er than Google). You can target by job title and even by company that the person works for. 🙂

No. I was a sucker who bought their ads a few years ago (ppc). With a lead generation page (to a loans site) that converts like crazy. Didn’t get one lead out of Facebook. Wasted my advertising budget once with them and not convinced that their quality has improved since.