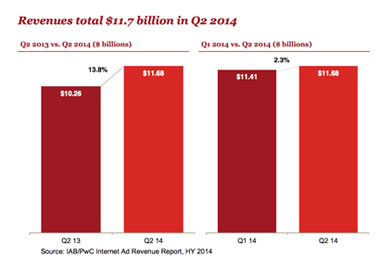 There’s a major surge in digital advertising. Mobile digital advertising has grown significantly and the digital revenue being generated is higher than ever before. Talking New Media reports on new data from IAB. ”Internet ad revenues climbed to an historic first half-year high of $23.1 billion, according to the IAB Internet Advertising Revenue Report released today by the Interactive Advertising Bureau (IAB) and prepared by PwC US. This marks a 15 percent rise over 2013’s first-half ad revenues of $20.1 billion.”

Some other highlights from the IAB report includes a 76 percent growth in mobile ad revenues, which hit $5.4 billion.

Digital video advertising has also experienced growth, reaching $1.5 billion in revenue — an increase of 13 percent from the first half of 2013.

These numbers, and the types of digital advertisements that are responsible for the growth, must be good news to brands and digital publishers out there.