Google continues to set standards in SEO and content quality, usually for the best.

Last week, Google and Facebook (finally) decided they’d wave their little wands on content quality and cut off ad revenues to fake news sites. If you spent even a wink of time on Facebook during the last few months of prime election season, you’ve probably spotted a few of these fake news stories that spread like wildfire as fact.

We’ve been working on an update to our publisher policies and will start prohibiting Google ads from being placed on misrepresentative content, just as we disallow misrepresentation in our ads policies. Moving forward, we will restrict ad serving on pages that misrepresent, misstate, or conceal information about the publisher, the publisher’s content, or the primary purpose of the web property.

But the news does come as a reminder that for many publishers, a percentage of revenue is in the hands of distribution channels like Google and Facebook.

And speaking of getting your content distributed on Google, they’ve added a new media type to their search listings: TV. For networks, this is great. For publishers, this might not hurt you either, because this fairly large new snippet isn’t placed above search listings pushing most content below the fold … except on mobile. On desktop, it’s to the right. But yes, on mobile, it pushes content many scrolls down the page. This might apply or hurt you if you’re in the entertainment niche reporting on TV shows.

According to Search Engine Land, the section is part of the “knowledge panel” called “on TV soon.”

“If you search for your favorite television shows, Google may show you the next airing of that show, what network it is on and what time it is playing. In addition, it will list the exact episode that will be playing and share the knowledge graph around that episode when you click on it.” 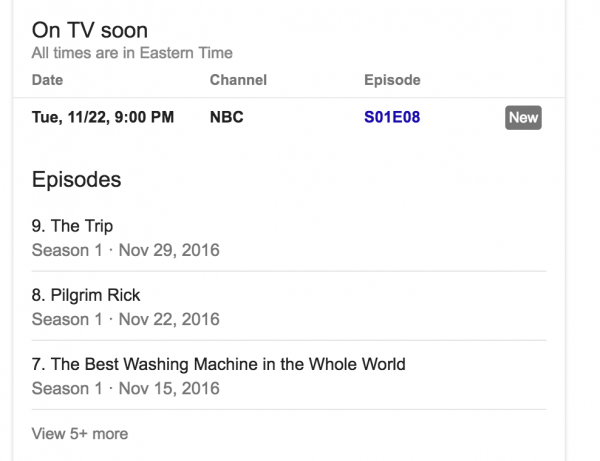 Search Engine Land’s tips for improving your site include: 1.) Improving your site speed, 2.) Not blocking CSS, Javascript and images, 3.) Designing your site responsively for mobile, 4.) Optimizing your most important fundamental tags like titles and descriptions and 5.) If you’re a regional magazine, you’ll want to start adding location-specifics in your titles.

How are you preparing for “mobilegeddon,” as the SEOs like to call it? We’re not too worried.