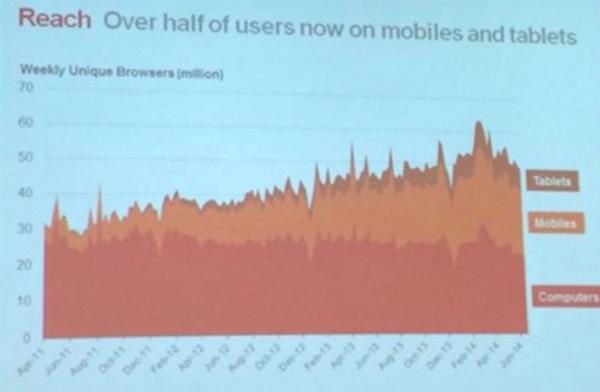 Digiday reports that the top magazine and newspaper publishers in the UK have seen their mobile website traffic surpass that of their desktop visitors, as more than half access it via tablet and other devices.

In addition, according to Ofcom’s Communications Market Report, 61% of UK adults now own a smartphone, and 44% of households own a tablet. Mobile has become the favorite board for British surfers.

Here’s a sampling of mobile success from British digital publishers:

The Guardian: “Half (48%) of TheGuardian.com’s pageviews come from non-desktop (phone browsers, tablet browsers, and apps) on a weekday. This rises to around 60% on the weekends. The Guardian’s mobile apps users are the most engaged of all its users, with users representing a small percentage of all readers while generating around 20% of its pageviews, according to its blog.”

FT.com: “The FT’s mobile strategy has earned praise for its sustained growth and its decision to choose Web instead of native apps. The result of this has meant mobile now accounts for nearly 50% of traffic to FT.com. Mobile also drives 20% of new digital subscriptions, according to latest results released by parent company Peason. Overall digital subscriptions have increased 33% year-over-year to 455,000, accounting for two-thirds of total paying audience.”

Digital Spy: “Digital entertainment site Digital Spy sees mobile and tablet traffic account for 48% of total Web traffic today, up from 36% a year ago. Tablet and desktop consumption come in at 14% and 38% respectively.”

BBC.co.uk: “Over half of BBC.co.uk’s users come from smartphone’s and tablets. At the recent news:rewired conference, the BBC’s Bella Hurrell revealed a graphic charting the growth in mobile and tablet traffic over the last three years. Desktop computer traffic has stayed the same while mobile and tablet has grown from less than 15% in August 2011 to over 50% today.”

To read more about the mobile outlook for UK publishers, visit Digiday.