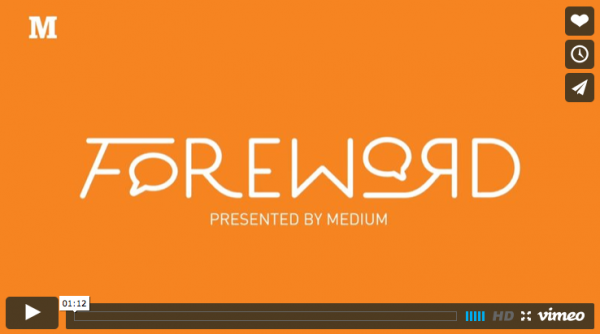 Ev Williams’ Medium – the long-form digital publishing platform that launched a couple of years back – has steadily grown in both audience and users, crossing off each item on its to-do list along the way. Gradually shedding its silly “platisher” tag and emerging as a leader in a media strategy, Medium has now moved on to the natural next step in its progression: monetizing video content.

First, though, it will focus on audience development for that video content – aiming to strengthen engagement with current visitors and expanding its reader- and viewership.

Foreword, an original series that premiered last week, represents the latest ambitious leap for Medium, which will feature the videos on a dedicated page in addition to establishing outposts on YouTube and Facebook.

The response has been low-key, Digiday reports, with the show earning just upward of 4,000 views in its first two days online.

But Medium’s style so far has been defined by the slow play, and it plans to experiment with the content as it finds an fanbase. This could include shortened versions, adaptations for podcast, and “targeted, paid distribution,” as Head of Corporate Development and Strategy Edward Lichty told Digiday.

“Foreword is completely aligned with what Medium is all about: thoughtful stories and ideas from writers. But the fact that we’re engaging via video is totally different,” Lichty added. “Right now, [Foreword] is on YouTube and it’s also posted directly on Facebook, because that’s where the people are. We’re a long way away from it ever making sense for us to have our own player.”

Still, Digiday reports that Medium has gotten inquiries from companies looking to place ads and potentially sponsor the series. Mequoda Members know from their own experience and our past coverage that producing high-quality multimedia – in conjunction with the industry developing reliable and accurate metrics – is a challenge that can pay off as part of a multiplatform publishing strategy.

“We’ve quickly realized there could be opportunities to partner with brands on Foreword. We’re definitely open to that,” Lichty told Digiday. “Being fundamentally Internet people, we have some amount of faith that if you do something great, it can get found. The first step for us was can we make a show that we’re really proud of, and we feel like we’ve done that.”

Medium currently attracts upward of 1.6 million unique visitors a month from the United States, according to comScore.