It can be done, and it’s not magic. All you need are a paid subscription website, a couple of other great products to sell and one secret: Decoy pricing.

More and more publishers are discovering this secret. And it’s not a new concept. You might know of it as the “contrast effect.” A simple description of it:

Contrast effect is the change in perception when different stimuli are put side to side to interact with one another. For example, a weight is perceived as lighter than normal when compared with a heavier weight.

But what does that have to do with pricing? I’m glad you asked.

The bottom line on decoy pricing

Let’s look at some actual decoy pricing math. The key, as you may have noticed, is first, having a subscription website where you can make these offers together, and second, in the careful pricing of your most valuable product. 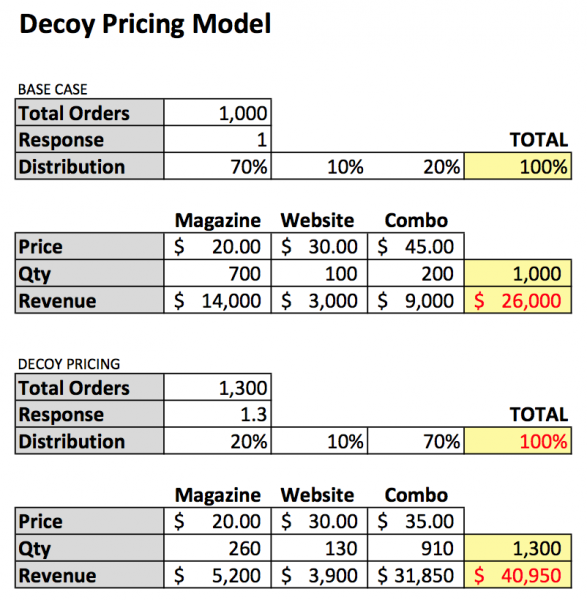 Most publishers assume that they should price their most valuable product accordingly:

After all, $45 is still less than the combined price for both products purchased separately. Consumers will respond to that, right?

Not according to our research, they won’t. We find that 70% of buyers will pick the cheapest offer, while 10% will opt for the second-highest priced product, and only 20% will pick that $45 price – it looks like a lot of money compared to the price just below it. People just don’t want to make that $15 leap from $30 to $45.

Now, let’s adjust that highest price to take advantage of the contrast effect:

Our research says the numbers of buyers shift dramatically: Now, 70% will pick the highest price! The middle price still attracts only 10% of orders, and the lowest price is the choice for 20% of buyers. And not only that: You’re also going to get more orders to boot– an additional bonus.

That makes for a dramatic increase in revenue. As you can see, making this non-intuitive pricing decision drives more customers to buy, and a much higher percentage of them to buy the most expensive product. Bottom line: The combo package generates $14,950 more for this generic publisher. That’s almost 60% more in revenue, all without changing anything other than your prices.

Here’s another example of decoy pricing from a publisher which has exploited this secret in the past. They are constantly testing pricing so this is not their current offer, however there’s a lot to learn from this pricing strategy which they used for some time.

The website-only offer was not a public offer, but became available when someone had exhausted his 6 free views on blog content normally behind the paywall. The user received this offer through a pop-up for a “starter” subscription that gives them access to premium blog posts.

These are fairly standard prices for a weighty product like the magazine from this publisher. But there’s more. You could also choose to get both versions of the magazine for far less than double the individual price, which would be $254.

Again, the strategy of bundling two products for much less than their actual combined prices isn’t particularly unusual. The highest-priced product, however, is where they are trying to score big:

Compared to $127 for one or the other magazine edition, $160 seems like a better buy. We’d bet they sold a lot of bundle #4. And getting all three products is a lot of money, but an easier decision to make – the buyer doesn’t have to actually choose between them. So the $300 price point probably gets its fair share of bites, too, although we would suggest that testing a lower price, like $199 might prove more profitable.

This publisher has been employing the contrast effect for some time. Before it launched its digital edition in 2011, it offered these subscription options:

Dan Ariely, a Duke University professor of psychology and behavioral economics, took note. He posited in a blog post that this was about not just contrast, but context. A potential subscriber might not know whether the website was worth $59, but it was pretty easy to see that the $125 offer for both website and a print magazine that also cost $125 was a bargain. In other words, it was a no-brainer in that context.

(Note: as with everything, we favor testing whenever possible. That said, The Economist may have left money on the table with the pricing above and a combined price of $135 or even $130 may have done better.)

Ariely took this notion a step further. He began surveying students about which option they preferred. Eighty-four percent opted for the combination offer, and to no one’s surprise, no one wanted to pay $125 just for the print magazine. The website-only choice got 16% of students to bite.

Ariely’s experiment confirms the contrast effect theory in pricing: An obviously inferior offer affected the decision-making process and made the combination offer seem more appealing than it did without its ugly stepsister in the mix.

Influencing potential buyers’ decision-making is one benefit of decoy pricing. Another is that you can disguise price increases by making them still seem reasonable in contrast to your pricier combination offers. And since many publishers are still stuck with those legacy rock-bottom, rate-base-driven prices of $8 or $10, this is excellent news.

Take another look at the model above. You know your customers would rebel if you raised your legacy $8 or $10 price to $20. But remember how the $35 bundle in our model appealed to buyers? Seventy percent of them chose that offer. At the same time, 20% went for the magazine-only price, because it was still the cheapest option of the three, even if it is a whopping $20.

Whether you’re a Duke economics professor or a niche publisher, decoy pricing is a secret that’s readily understood. It’s all about human psychology. And people with products to sell should be ready, willing, and able to entice other people to spend the most money on those products as possible.

Do you have experience with decoy pricing and the contrast effect? I’d love to get some additional real-world data, especially if you’ve tried something different from my examples above. Let me know in the comments, and we could feature your story – successful or otherwise – in a post soon.

Originally published in 2013 and updated regularly.

Yes this works and has worked in software sales as well. Good articles thanks!

I subscribed to Bloomberg Businessweek via that promotion. It really DOES work! 😉

If you are producing the products anyway the more revenue you can obtain, the greater the commitment and engagement, the greater the LTV. More products enables more communication which should achieve additional product sales if the quality and value is there.

Thank you David. It’s a good point. It’s important to note that the higher priced products are digital. So, for instance, in the Biblical Archeology Society example I cited, the incremental cost of the digital magazines is about $.04 per issue, and the incremental cost of web access (for the full year) is almost certainly less than $.01. So the total incremental fulfillment cost of a subscriber is a quarter a year.

In contrast to the old print-only days, because of the extremely low cost of fulfilling these digital products the offer that produces the most revenue is almost always the one that produces the greatest profitability.

I don’t disagree with your premise, but I think it is a little misleading to only look at the revenue side of the equation. Yes, you drive more revenue with the combo offer, but you also have additional cost of delivering the print product. It would be interesting if you could layer in the expense side; I suspect that your examples would still show higher profit, but not at the same multiple you are showing just for revenue.