Results from recent studies are showing a trend that Americans think advertorials, also known as custom content, or native advertising content — add value to a website. This is especially true when the content is relevant, authoritative and authentic. Not to mention, clearly marked as sponsored content.

Are you an editor, and does that shock you? As advertorials have become the norm in online publishing, some editors are up in arms about having sponsored content associated with, or adjacent to, editorial content. But advertorials are something that consumers are into, as long as it’s clear to the consumer that the content is sponsored.

And if you’re an ad-driven legacy publisher, advertorials have been a part of your business model as long as you can remember. They occupied the 16-20 page “special advertising section” of your publication.

That doesn’t mean it’s always been well-liked by editorial enthusiasts, though. Back in 1975, Xerox Corporation had an article written in Esquire magazine by Pulitzer Prize-winning reporter Harrison Salisbury. E.B. White (yes, that E.B. White) was outraged, and said “Sponsorship in the press is an invitation to corruption and abuse. Wherever money changes hands, something goes along with it — an intangible something that varies with circumstances.”

We don’t agree, and consumers don’t either. In fact, a Reuters survey shows that 75% of consumers say they don’t care if content is sponsored, that if it’s interesting, they will engage with it. And a Time Inc. study showed that 2 out of 3 GenZ, Millennials, and GenX consumers think that sponsored content is more “sincere” than traditional advertising methods.

The reason why readers enjoy advertorials is because the goal of an advertorial is still to inform and engage. In fact, its goal is often to build loyalty, so it’s rarely sacrificed on the altar of marketing. Other than the obligations to mark it as sponsored, they might not even process it as an ad while reading.

This is the reason why we also refer to it as “custom content,” because more and more, advertisers are trusting magazine publishers to write the content with the same integrity as they do their editorial content. So let’s be clear when we talk about advertorial-type content, we’re talking about writing really good, helpful content that is more than a blatant ad.

Advertorial examples in the wild

Did you know that some magazines were launched as ads? Bon Appetit was started by Pillsbury.

There’s no universal policy on how the content is created – by the publisher, or the advertiser. In the past, for a quarter of a million dollars a year you could blog your brains out onto Forbes.com, and nobody would tell you what you can or can’t write about. But other publishers have marketing services groups under an editorial director who manages the sponsor packages.

MetroParent.com is the Portal for Metro Parent magazine, a free, sponsor-supported publication for parents in the greater Detroit and southeast Michigan areas.

Metro Parent has great examples of quality advertorial content. One of the keys to their advertorial success is that they have a web magazine, which means the content can be viewed on any device and read like a magazine, with an index. The advertorial content is placed in front of the firewall, so that unknown, logged out users can still access the advertorial content. For every issue of the web magazine, you can see the index on the right hand-side of every “page” of this web edition. Even better for their sponsors, sponsor content can be promoted in social media and in email newsletters because it’s on the web, and not contained to the box of a newsstand app. 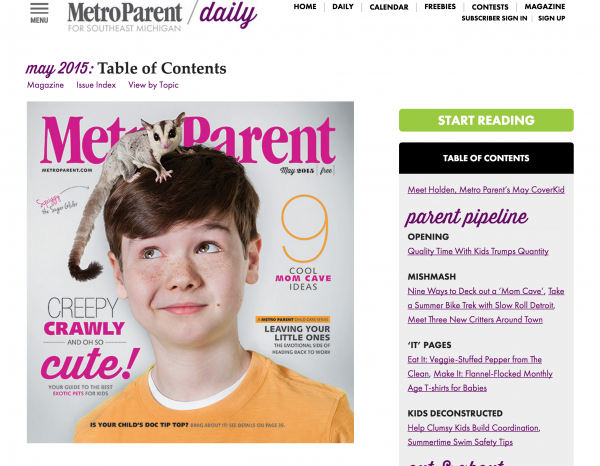 Here is an example of custom content they developed for a local school, written by a teacher at that school. By looking at this article, there’s nothing to indicate that the author, or the sponsor has ulterior motives, as is often the misconception when it comes to advertorials. Instead, it’s a comprehensive, authoritative article by an expert. No different than anything else in the magazine, in terms of editorial integrity. 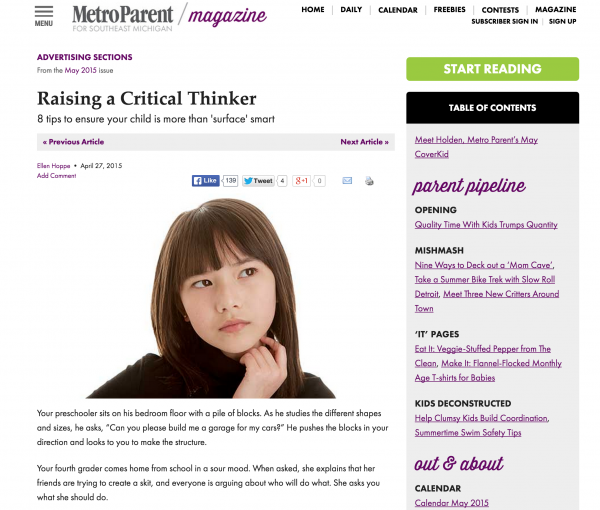 At the bottom of the article is a link to the school. 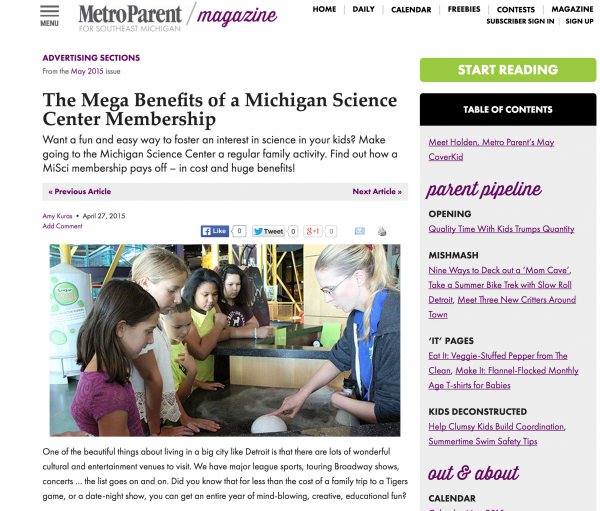 MetroParent’s custom content is hugely beneficial for their sponsors. Again, because they have a web magazine, advertorials can be promoted in daily emails, portal posts, banners, social media, and everything they normally use to drive traffic to a post. They also allow the sponsors to re-use the content on their own sites and use their own social media outlets to drive traffic to the content.

How to Spell Advertorial Success for Your Sponsors

What we love most about Metro Parent is that they’re not saying “let me sell you ad space.”

What they’re saying is, “let’s talk about your content goals and message development – and let’s work in conjunction with your experts and our experts to write 12 great articles. And let’s make a media package that drives traffic to those articles.”

Here’s how to ensure success for your magazine and your sponsors:

If you want to sell advertorials, help your sponsors create better content. If your sponsor is Schwepps, you can’t allow them to write an article about “The Best Gingerale.” It doesn’t do any service for your readers, and in the long run, for your sponsor. Instead, coach them on a post about the benefits of ginger, or a recipe for a Jack and Ginger. Everybody wins.