Although it might seem like we ignore the trends of print magazines unless they’ve fallen off the map and decided to go digital, we’re still paying attention. One recently interesting bit of news about Star magazine and a complaint from the BBB could be useful to know.

According to minOnline, “In response to a complaint filed by the Better Business Bureau’s National Advertising Division (NAD), AMI announced that it will no longer run SlimFast advertisements in Star using a format considered by NAD to be insufficiently differentiated from editorial content, misleading readers.”

Now we’re used to hearing about native advertising getting penalized, but it’s a long time since we’ve heard about sponsored content in print being even noticed by authoritative organizations (nice to see regulations being enforced, by the way.) In fact, their spokesperson said, “It’s the first time NAD, which typically reviews claims made in advertising, has held a publisher responsible for the way native advertising is presented.”

To sum it up, there were a couple articles in Star that were sponsored by SlimFast, but were not marked as well as they should have been, like an article called Snack Your Way to Slim from September 26, 2016.

“The cover page referred readers [to pg. 58] of the magazine for an article titled, ‘Snack Your Way to Slim.’ … This cover story and article appeared to be editorial content but were in fact advertisements for SlimFast.”

Sponsors on the front cover — nice ad buy, SlimFast! But not so hot on the part of Star, of course. minOnline notes, “Though presented as unbiased copy, the articles in question included claims directly from SlimFast marketing, like “clinically proven to lose weight and keep it off,” and “the superfast slim-down secret.” As you can see from the ad, there’s no indication of it being a paid advertisement. 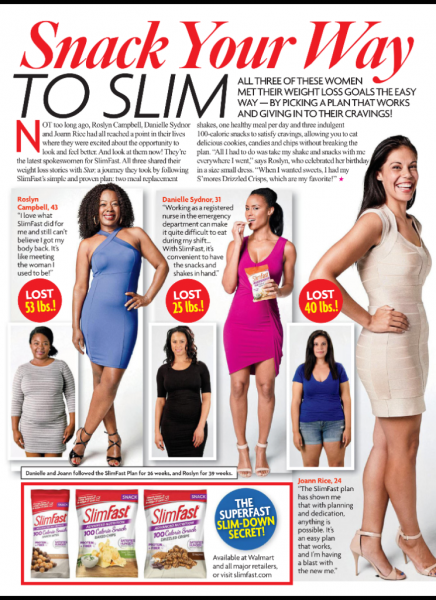 As we all know, native advertisements online need to be very clear, heck you can’t bounce your eyes around the page without landing on a big bold “ADVERTISEMENT” sticker. But as you can see, other than the ad in the bottom left corner, there’s no indication that the article itself is sponsored or perhaps even written by the sponsor.

American Media, Inc who publishes Star respectfully disagreed, but also discontinued that campaign with SlimFast. On the other hand, minOnline says “a number of dubious articles, purportedly written by editorial staffers but almost certainly part of a paid SlimFast campaign, proliferate throughout AMI’s portfolio of websites, including StarMagazine.com, OKMagazine.com, and MensFitness.com. The absence of proper labeling on these stories is particularly notable given the presence of other articles on the same sites that clearly lie more in the realm of compliance, like this one for OK!, a series of workout tips sprinkled with product recommendations and labeled “promoted content.” They’ve been treated fairly by the BBB, but hopefully they’ll clean their online ads as well, so that the less generous team at the FTC doesn’t come knocking.