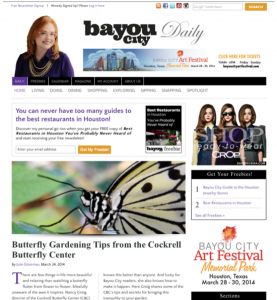 We couldn’t be prouder of our client, Bayou City, for their recent recognition by Niche Media. We’ve helped with hundreds of launches over past the past three decades, yet here we are with a first: the first time we’ve ever been part of a simultaneous print-digital launch.

Now, we knew that Bayou City, a Houston area, advertising-supported magazine about “close-in” neighborhoods of the city, had done an outstanding job in launching their new products without any legacy content whatsoever to fall back on, but it’s certainly a thrill to find that their peers know it, too.

In announcing their “Nichee” awards, the folks at Niche wrote, “Bayou City is off to a bright start and has launched as a fully interactive media property with tons of augmented reality and a designed-for-the-iPad tablet edition.”

They certainly have. Bayoucitynetwork.com and its associated print magazine launched in November 2013, and two weeks later, the digital edition launched. In the first month, the website saw 1,000 unique visitors; three months later, they’ve seen 6,000+ uniques and the number is still climbing.

Don especially notes the “unique spin” that Publisher and Editor-in-Chief Becky Davis has put on this enterprise. “She’s updated the entire regional magazine format,” he enthuses.

“Becky is an example of somebody who wanted to be multiplatform right from the start as a competitive advantage in going up against several other city magazines in their market.”

Davis is characteristically modest. “We’re very excited to win this award,” she says. “We stepped out on a limb and are first in our market to embrace new technologies such as responsive design websites and emails, interactive print and an enhanced tablet edition. It’s very gratifying to have our efforts acknowledged with this award.”

To expand on that, Bayou City is one of the first magazines we’ve ever seen, in Houston or out, with these technologies. The print product features augmented reality via an app called Layar, which allows users to scan enhanced print materials with a smart phone or tablet to “view rich digital experiences right on top.”

The digital magazine features Mequoda’s best-practice reflow design, along with extra content and features from Mequoda Best Practices that even are rare even among the earliest digital magazines, including the ability to tap a cover teaser and go directly to that article.

And because Bayou City was born as a full-fledged multiplatform operation, Davis approaches content in a way completely different from other magazines. She doesn’t just assign stories: She assigns multimedia packages, including a story for the magazine, a related piece for the website, and social media tie-ins.

“They’re true multiplatform publishers, thinking about all platforms with everything they do,” Don notes. In fact, this experience has been a new one for Mequoda, which had always worked with clients starting with one platform and adding new ones, one at a time.

For example, Don explains, “We had the chance to think through the implications of print design on a reflowed digital magazine. Even now we’re all learning how to minimize production efforts in reflowing print to digital.”

Another exciting aspect of this venture is the idea that the digital product means the print product, which is free at news racks around the city, is never “out of print,” even when the copies disappear in the first few days. Using the digital app, readers can get their hands on any older issue instantly.

That in turn opens up a new merchandising possibility that the company is pondering: Promotions on the empty racks advising readers that they can get the current issue by downloading the app.

Anyone reading this post who might be contemplating launching a new multiplatform publishing business from scratch should absolutely be following their progress and learning how to do it right.

Have you launched as a full-fledged multiplatform operation? What were your challenges and/or biggest successes? With more entrepreneurs considering digital publishing than ever, this is a subject of greater interest than ever to Mequoda.