Outside Magazine is keeping its head above water for now 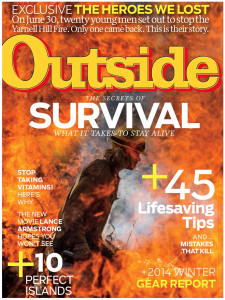 As a 36-year-old, Outside magazine from Mariah Media is, naturally, quite physically fit. Established in 1977 by Rolling Stone co-founder and publisher Jann Wenner (also current owner of Men’s Journal and US Weekly), the magazine was sold to its current owner in 1979.

Since 2010, it has also had the luxury in terms of audience exposure of a sister satellite television network, Outside Television. Presumably that has helped it survive the print magazine downturn; since 2010, just after the iPad’s debut and digital magazine publishing was born, Outside has lost a miniscule 0.2% of its circulation, and stands at 685,164 as of June 2013.

For context, in last week’s post about the top 100 circulation magazines, the average growth in those three years for all 100 titles was -0.8%. The bottom two publications on that list, both from Reader’s Digest Association, were a 32.38% loss for Birds & Blooms, and a frightening 47.08% for Country.

Outside is struggling with driving traffic to its website; its Online Media Index (average monthly unique visitors divided by total circulation) is 0.19. The higher the OMI, the healthier the publication will be generally, with large traffic volume that can be converted into email subscribers and eventually into buyers.

Though it entered digital magazine publishing with the June 2011 issue, Outside does not currently report its digital circulation. Total circulation did spike in the year following the launch of the digital edition. The iPad version contains no advertising, and according to min, Outside print has lost 8.3 pages of advertising since this time last year.

The Outside iPad version is bundled with print for $19.95, while print + the Kindle version – a simple replica with no digital enhancements whatsoever – will set you back $24 if you find it at Amazon.com, but is only available as a monthly subscription at $1.99 per month if you try to buy it on the Kindle newsstand. At Zinio, you can get Outside for the iPhone, Rim, iPad, Android, PC/Mac or Win8 for $24.

[Outside probably has an opportunity to generate a higher average sale price by doing some more creative bundling — see our recent post on decoy pricing — but that’s a separate issue I won’t get into here.]

Meanwhile, the iPad version is well represented on the Outside website. Unlike other well-known brands, Outside loses no opportunity to promote its digital edition there. 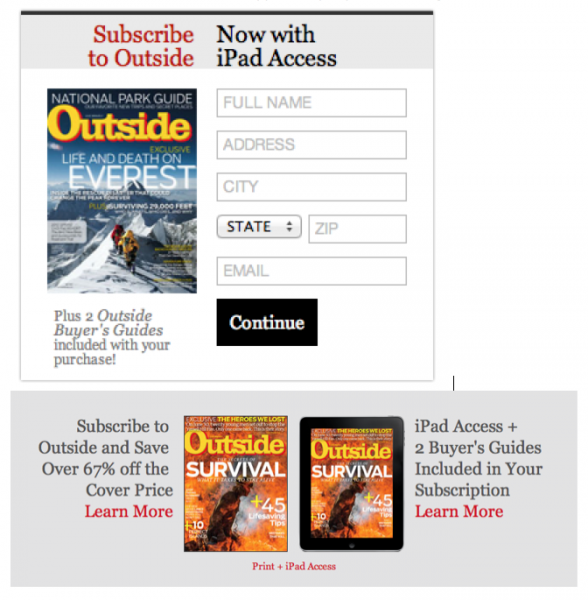 Overall, Outside appears to be treading water fairly successfully at the moment. It’s not as healthy as some magazines, but it isn’t drowning, either. And a look at the digital magazine against Mequoda Best Practices show that it is, once again, a mixed bag.

Mequoda doesn’t see much sense in digital magazine publishing if your content is unreadable. Outside has executed this well in its iPad edition, which features vertical reflow and is a delight to read. (However, the Kindle version is a simple replica, almost unreadable on the small Kindle screen.)

Outside has a scrubber bar and handy arrows to indicate which direction to swipe from each page. There’s no user’s guide …  but as we’ll see, there are no features for which a reader needs instructions.

Outside uses both modes, as many magazines still do. Note: Having both doesn’t make for poor design in a reflowed edition; Mequoda’s digital magazine publishing Best Practice of choosing one or the other is a function of conserving resources. Outside is comfortable spending extra on this, though we don’t believe it’s necessary. (And in the case of the replica Kindle edition, content viewed in landscape mode, where a two-page spread appears, becomes downright miniscule.)

1. Magazine uses available technology to enhance the reader experience.  NO

Oddly for a magazine about physical action, there’s no video or animation  (even exercises are illustrated in a decidedly old-school way), and no extra content. The only hotlinks take the reader to websites for the manufacturers of products that are recommended in the content. 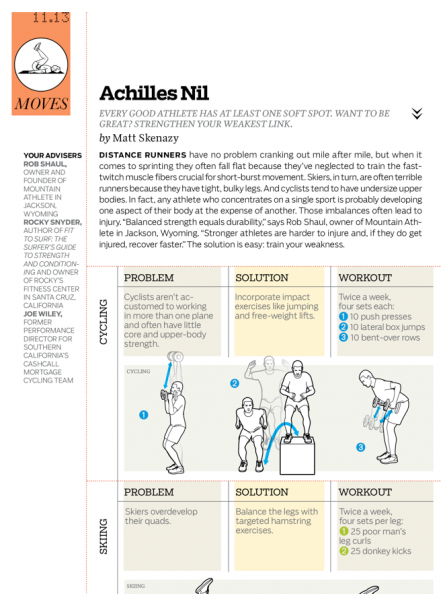 On the website, Outside’s FAQs state: Outside‘s iPad app takes advantage of the latest technology to deliver a truly immersive reader experience that maximizes the potential of the digital magazine. We also enhance stories with additional photo galleries, exclusive videos, and interactive features.

I’m still looking. Maybe they used to have such features in earlier issues that I didn’t buy.

When it comes to truly successful digital magazine publishing, Mequoda is a firm believer in posting daily content to keep readers thinking of you more than once a month or once a week. If you’ve got a robust website, as Outside does, it could certainly keep your digital subscribers engaged to post some of that content to your app.

There are samples of several recent issues, plus free guides to family adventures and running trails. This is something many publishers overlook, to the great ire of their audience, so Outside gets major kudos for this one.

Recent reviews complain about various glitches, but I haven’t encountered any of them.

As I mentioned, the iPad edition has no advertising, and while there is advertising in the Kindle version, it’s a simple replica with no interactive features.

This is used on much of their content, which is a plus because of Outside’s outstanding photography.

Outside has always excelled at offering special reports on gear and destinations, and it doesn’t fail to seize this opportunity to sell them. Again, this seems like a no-brainer, yet many publishers simply don’t bother.

Outside could benefit from at least offering social media sharing, since its subscribers clearly aren’t pursuing these outdoor activities alone.

This is a major hurdle for digital magazine publishing, as Apple’s newsstand is notoriously difficult to search. Outside is listed in Apple’s Sports category. I tried and failed to find it in a reasonable time by searching “Sports” and by browsing the Sports category. Many of its competitors are easily found by browsing the Outdoors and Nature category, where Outside wouldn’t have to compete with giant sports magazines like Sports Illustrated.

Overall, Outside is fighting the good digital magazine publishing fight with its iPad edition. Continued work on tweaking some of its practices would probably pay off in higher overall circulation, but in the meantime, it’s a reasonably pleasurable experience to read digitally.

Have you read Outside on the iPad? What did you think of it? Can you compare it to any of its direct competitors?

Thank you for sharing your thoughts John. We’ll certainly keep an eye on those when we update our review.

The App has some serious flaws – such as no users guide which would take very little time to write and publish. Escaping out of an issue to go back to the issue store is not intuitive neither is bringing up the bottoms nav which shows thumbnails of pages. It’s pretty surprising that a national magazine could have such a poor user experience.