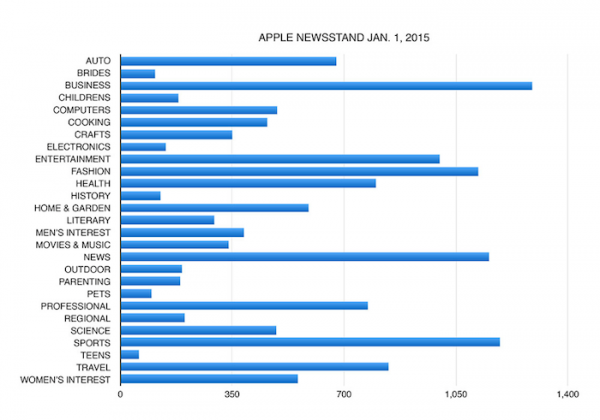 As of January 1, the total number of paid and free Apple Newsstand publishing titles had jumped to 14,536, up from 11,000 at the beginning of 2014, reports Talking New Media. This represents an increase of more than 30%.

In spite of an at times frustrating lack of management and maintenance of the Newsstand on Apple’s part, the number of apps and digital magazines continues to grow. According to Talking New Media, Magzter now has the majority of its 1,702 apps in Newsstand, while PressPad has 347.

Growth across Apple Newsstand publishing categories was sustained – Computers & Internet, for instance, hovered right around 490 apps – while some saw a bigger boost: B2B launches spiked 40% spike in 2014, and the Professional & Trade category went from 550 apps to 775. The highest-performing niches continue to be Business, Entertainment, Fashion, Health, News, Sports, and Travel.

Still, Talking New Media‘s D.B. Hebbard, long a critic of Newsstand infrastructure, cautions that tracking apps and subscriptions is an inexact science. In addition, he suggests that certain trends are taking shape.

“More and more, the Apple Newsstand is a place where it is easy to find something to read, and harder to find what you want to read. (This applies to many other digital newsstands, as well.) On top of this, the mechanism that initially drove sales, the monthly digital subscription, is now being blamed for declining sales. (Apple sends out monthly renewal notices that many publishers believe encourages cancelations.) Many of those who initially saw the fast growth of the Newsstand as a net positive, now wonder if the clutter of the sales outlet will lead to both publishers and readers looking elsewhere to buy their reading material.

Two trends to look for in 2015 may be 1) the growth of Netflix-like subscription services (such as Next Issue and others) and 2) publishers selling their digital editions directly through their own websites. If discovery remains poor in the Newsstand (or on Amazon.com and Google Play), then publishers will see that they must drive their own sales and will look to create digital editions that first can be bought directly, and only secondarily be purchased through a third party newsstand.

This could lead to a large number of apps being pulled and replaced with newer apps. This is when many publishers will regret their decision to have launched their first apps using vendors that control their brand names and how their apps are presented inside the Newsstand. Launching an app, many publishers have found, is the easy part. Taking control of their digital publishing efforts, and succeeding in driving sales, is much harder.”

Mequoda Members are all about taking control of their digital efforts, while taking a multiplatform publishing approach to driving sales. While we have always believed that all newsstand models could benefit from some self-improvement, we also believe that a newsstand should be a part of that approach.

What’s more, Apple Newsstand is currently your best option, for three reasons. First, it’s a bargain, since you earn upward of 70% of your sales. Second, you have access to almost 500 million tablets – in the form of iPads – around the world. Finally, Apple is relatively generous with its data.

What has your experience been with Apple Newsstand? What are your thoughts going forward in 2015?

Read more about the increase in Apple Newsstand publishing at Talking New Media.