Two online publishers are added to the Mequoda Hall of Fame, recognizing their achievement in the advancement of successful online publishing and marketing best practices

Recently at the Mequoda Summit, we introduced two publishers into our “Hall of Fame” with Mequoda Publisher of the Year Awards. The intent was to honor individuals and their organizations for outstanding achievement in the advancement of the art and science of Mequoda System Publishing.

Talking with Charlie Spahr of Ceramic Arts Daily, our 2007 Publisher of the Year, Don explained that becoming a Mequoda System publisher “is chaotic, it takes time, it takes re-training, and most publishers we talk to just aren’t ready to go there.”

Don also explained that our 2008 Publisher of the Year, Bill Dugan of fuelNet had the disadvantage of launching during a recession, but because they had their parent company Pohly behind them in building a digital publishing company from scratch, they were able to make it happen.” 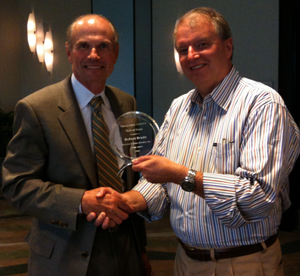 Our B2B Publisher of the Year went to Bob Brady of Business & Legal Resources. Brady told publishers in the room that it’s extremely important for your staff to understand the purpose of your company as a whole. “We have a .NET programmer who understands how marketing copy is a part of our efforts at BLR. Just the same, if you have an editor with no sense of marketing, you’re losing an opportunity.”

“I think one of the big reasons I’ve been successful at this, is that I was free to make mistakes, and there was no one around, because I own the company, to fire me,” Brady joked. “In the culture that we’re all in, we need to allow mistakes as long as we learn from them. You need to make mistakes and immediately know what you can improve next time.”

Brady reminisced about the first time he used a CD, which was basically an encyclopedia on disc. He said, “I went in thinking, what can I do with a CD? I make books! But then I thought, I have 600 page books, that cost me $25 to mail. A light went off that this was a real opportunity.”

Brady went on to explain that the Internet happened in the same fashion for him. “Being outside the company, talking to the “propeller heads”, and people who are experimenting with new things can help you in your own business”.

On the topic of creating new products, Brady told the audience that “the customer doesn’t know what they want, it’s our job to take on the challenge and figure that out.” 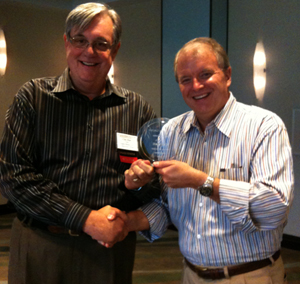 Our B2C Mequoda Publisher of the Year was Clay Hall, CEO of Interweave. “I have to say, this is a well-deserved award,” Hall joked, giving credit to his team and the Mequoda team for their success.

“At Interweave we had our best year ever in 2008, and we’re having an even better year in 2009. If it weren’t for our ability to learn and adopt to the Mequoda principles, we wouldn’t be saying that,” Hall told publishers.

“We’re fortunate that 82% of our revenue comes from the consumer, whether directly or indirectly, so we’re not as sensitive to advertising”, Hall explained. “We’re also very fortunate to have built a multi-platform media business that is email-centric.”

“Our implementation of the Mequoda Hub systems didn’t come easy to us, it required us to hire a whole new set of people we hadn’t worked with before. But I have to say that my biggest mistake was not hiring them sooner.”

Hall referred back to Brady’s speech about not being timid. “We wanted to see results along the way, before we made bigger investments. We should have been less timid and made those investments sooner rather than later.”

“One of our biggest challenges has been focus. Focusing on getting something out the door, launched and operating before making improvements.” Hall explained that they have a brilliant and creative team at Interweave, but instead of getting what they call “shiny object syndrome”, they needed to slow down and do one thing at a time.

Hall also explained that it’s important to pay attention to the way your audience interacts. At Interweave, they serve many different niches. For example, people at a knitting conference would be pleasant and friendly to a person they saw making the same sweater. At a beading event however, two people making a similar piece of jewelry would head for opposite ends of the venue, “elbows would be flying, trying to get to that very special bead they want”, Hall joked.

So to serve these two types of audiences, Interweave offers different types of engagement. KnittingDaily.com focuses on community because the readers are very actively engaged and proactive, while BeadingDaily.com offers competitions and ways for them to show off their work in galleries. “Your consumers engage online very similar to the way they do offline,” Hall said.

One last nugget of wisdom from Hall was that “Google is our ‘frienemy’ – part friends, part enemy. While they take our content and monetize it in ways that we can’t, they also give us a tremendous way to not only supplement but also replace the loss of the direct mail universe. We think of Google as our list universe today and we mine the heck out of it.”

“There is no finish line, it’s about constant and consistent improvement,” Hall finished.