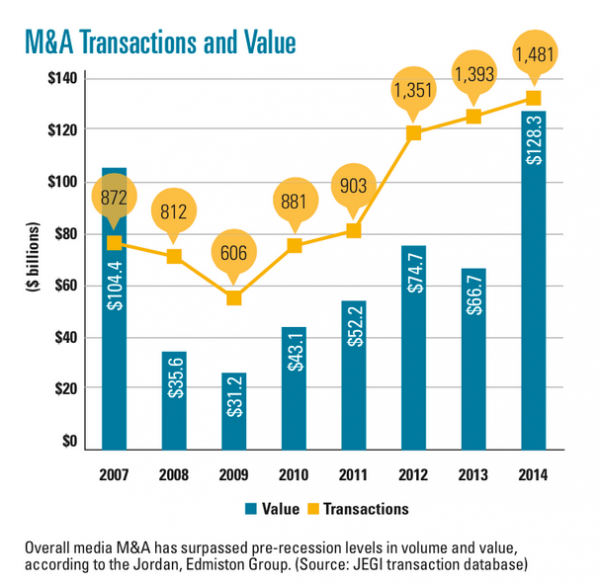 Multiplatform publishing is a business model we believe in with every fiber of our professional being, and we put those beliefs into practice around the clock. So, it’s nice to look up from our work every once in a while and see that more and more people are realizing how profitable it can be: A recent streak of media M&A deals has analysts talking in terms of pre-recession levels.

Multiplatform publishing not only drives audience development and engagement, but as Folio: points out, a diversified approach – with digital, events, and other sources of revenue offsetting print – is a formula that’s particularly attractive to deal-makers lately.

“B2B, despite comparable volume, has not quite regained pre-recession stature, but there have been some significant deals made in the last couple years that show there’s still major interest in that category. UBM bought Advanstar for $972 million. Wasserstein bought ALM back for about $417 million, which put its EBITDA multiple at about 8x. ALM itself has since gone on an acquisition tear, recently picking up Summit Professional Networks.

“Meanwhile, financial buyers are getting back in the game, says Berkery Noyes managing director Mary Jo Zandy. ‘According to the data in our full year media report, the number of deals backed by financial sponsors increased 35 percent from 2013 to 2014. Nonetheless, strategic buyers should continue to dominate the media landscape as they look for tuck-in acquisitions.'”

Banks are back after reestablishing their handle on debt markets. Folio: reports that covenant-lite loans are once again in play, while financial institutions have managed to sell off properties they acquired during the recession and reinvest in media companies – even smaller ones with an EBITDA of around $5 million.

Publishers that found themselves focusing on efficiency during the recession in order to make it through are now in the position of finding ways to grow. Folio: reports that lenders are looking for smaller companies to expand by acquisition, rather than by launching new properties.

“Companies with deep pockets would much rather launch, but those tend to be much larger companies. You see that in the raises that have happened,” Breaking Media CEO John Lerner told Folio:. “For smaller companies, it’s a much cleaner and easier presentation to raise money and buy with it than raise it and launch something from scratch.”

These collaborative partnerships are a factor in encouraging consolidation, especially in categories with, say, a dozen titles but a clear front-runner or two, Mickey learned from Meredith’s John Zieser, chief development officer and general counsel.

What are your thoughts on the media M&A craze? Have you seen it up close and personal? Tell us more in the comments!

To read more about the resurgence of magazine + media M&A, visit Folio:.