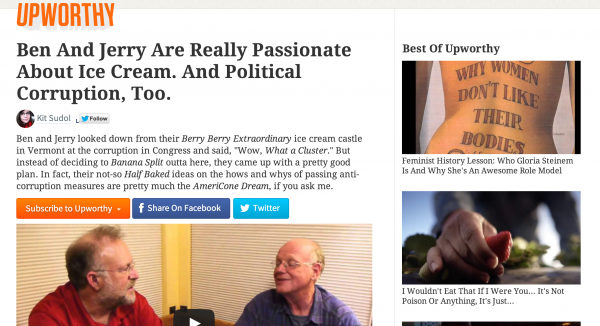 What’s in a headline?

It’s been awhile in coming, but niche publishers are having things their way at last.

Mequoda has been preaching this sermon for a while, but now, it seems, the rest of the world – including all-important investors – are catching on, too.

Those living in non-Mequoda world were advised of this phenomenon recently in a post at business-related news website qz.com, where well-known media reporter Adrienne LaFrance noted in a piece titled Why Venture Capitalists Are Suddenly Investing in News that new money is flowing – actually, flooding – into media organizations, citing, among others, $46 million in new funding for social news and entertainment site BuzzFeed; $4 million for tech news site Pando Daily; and $8 million for viral content curator Upworthy – called by Fast Company “the fastest growing media site of all time.”

So what’s going on here? The pundits thought news was dead in the Internet era: that, as BuzzFeed chief executive Jonah Peretti told LaFrance, “When we started [in 2006], investors did not want to invest in anything that involved journalists or reporters or other professional people creating content.

“Everyone just said, ‘You can’t get venture capital if you’re hiring people who make content.’ ”

Fast forward: Pando Daily founder Sarah Lacy says that about the time she was launching her site in 2012, “Suddenly, the market for content just opened up … It’s dramatically changed.”

I’m struck by these remarks because everyone sounds so surprised. At Mequoda, content creation has always been our bread and butter, and now we’re just pleased that the folks with the fat wallets are finally recognizing its value.

Oh, there are some who still hesitate. Peretti of BuzzFeed reports there are still people who say, “If there’s any humans making content then I don’t want to be involved.” And Upworthy, whose content is entirely created by others, actively rejects the word “journalism.” One investor tells LaFrance that the J-word scares off many investors, who prefer curation of user-generated content instead of paying for a full-time editorial staff.

But big, well-funded players like BuzzFeed, Pando Daily and Business Insider are deeply engaged in traditional, long-form, investigative journalism. And other sites, such as animal news aggregator The Dodo, curate others’ content but also slip in short pieces of their own creation.

Why? Pando Daily’s Lacy, referring to yet another enormously successful news site, Vice, says, “They’re trying to speak to a very specific audience that’s hard to reach in a deeply authentic way. It’s certainly not something you’re phoning in. It’s not a pre-written press release. It’s not a listicle.”

Ah, now we’re getting close to the answer. Investors like journalism again because it’s quality content, not quantity. It reaches specific audiences. Now who else do we know who creates that kind of content? Why, it’s the niche publishers Mequoda has always served! Imagine!

And not only do we believe in the quality of content created by niche publishers, we’ve also noted before that by reaching that “very specific audience … in a deeply authentic way,” niche publishers are also able to deliver more and better leads to their advertisers. After all, if you make martial arts floor mats, where will your advertising dollars be better spent – at ESPN.com or BlackBelt.com?

Then there’s the entire content marketing and native advertising phenomena practiced by non-publishers: These businesses have also noticed that content is so powerful, they’ve practically taken over from actual publishers. Says the Content Marketing Institute, “Content marketing is being used by some of the greatest marketing organizations in the world, including P&G, Microsoft, Cisco Systems and John Deere.”

With all this going for it, it’s really not all that surprising that quality niche content is suddenly “in” again. And again, because we’re a company that believes in the little guy, let’s consider not only these fabulously wealthy big players but some of our clients who are joining them in what we think of as a “race to the top” for niche journalism.

First, let’s take a look at the one publishing site I’ve mentioned that is 100% curated content. Upworthy is a juggernaut, and it doesn’t engage in journalism. But don’t write off its editors, because good curation is a talent, and getting content to go viral is hard work.

A recent video of Ben & Jerry of ice cream fame discussing politics was posted on the site, and the editor wrote the all-important headline to help the piece go viral, and also a very clever introduction.

Ben And Jerry Are Really Passionate About Ice Cream. And Political Corruption, Too.

Ben and Jerry looked down from their Berry Berry Extraordinary ice cream castle in Vermont at the corruption in Congress and said, “Wow, What a Cluster.” But instead of deciding to Banana Split outta here, they came up with a pretty good plan. In fact, their not-so Half Baked ideas on the hows and whys of passing anti-corruption measures are pretty much the AmeriCone Dream, if you ask me.

In fact, the headlines at Upworthy are so awesome, I think we’ll need to study them the next time we write a post about email subject lines.

Put A Brilliant Scientist In A Toy Store, And He’ll Start Changing Lives Left And Right

He Used To Recruit For Them. Now He’s Working Against Their Message. And They Want Him Dead.

This Woman Stripped Her Dress Off While Onstage In The Name Of Feminism. Point Well Made.

I think we can safely include Upworthy among the journalistic websites we’re discussing here. It’s similar to The Dodo, another investor favorite, where the editors do write their own short pieces that they know will appeal to a niche audience, and, of course, include killer headlines.

This is much more than cute cat videos, and its investors agree. Quality niche journalism understands how to reach out to the audience it serves.

In fact, these two mega-sites remind me of some of our much smaller clients, who also post constantly in order to drive traffic (a Mequoda best practice, of course) and turn out quite a lot of excellent, click-worthy headlines themselves.

From Bible History Daily, where the subject matter isn’t quite as much fun for a general audience, but the headlines excite its niche audience so much that they earn anywhere from 300 to 3,000 likes in social media – and gained BHD more than 80,000 fans.

Hero and Villain: Outline of the Exodus Pharaoh in Artapanus

Niche publishers understand their audience intimately and deliver exactly what it wants at all times. Maybe BHD’s publisher, the Biblical Archaeology Society, won’t be engaging in any Series A funding rounds anytime soon, but it understands how to connect with its audience so well, its traffic grew a whopping 111% last year, making it the Mequoda Rocket Award winner for 2013.

Then there’s Mother Earth News, whose connection with its readers is legendary. Consider this recent content starring front and center on their site:

Don’t Rely on Diabetes Symptoms To Reveal a Problem

The Emergence of Perennial Wheat

Grinding Corn or Wheat With a Mountain Bike

Again, the big wallets aren’t lining up to hand over boatloads  of cash to MEN, but publisher Ogden Publications will happily settle for growing its revenues 70X over the past 10 years! Simply put, it pays to have humans making content.

And it’s not just good for consumer publications, either. Consider how Business Insider conducts its business: This US business and technology news website launched in February 2009 not only aggregates top stories from around the Web, it also generates come attention-getting long-form pieces that are, in turn, quoted by more old-school publications such as the New York Times.

Business Insider just raked in another $12 million in funding, the investors including Amazon.com founder Jeff Bezos. It plans to use the funds to hire more journalists and photographers, among other things, so clearly in business journalism, the J-word isn’t putting off all investors.

Mequoda mentors a B2B website in DARK Daily, which delivers the latest news for those who own and operate clinical labs, pathology groups, diagnostic tech companies and lab industry suppliers. Yes, that’s a very small and focused niche – and DARK Daily is the acknowledged leader there. It draws some 700+ people to its annual War College professional development event, where attendees are so loyal to DARK that upon meeting one of Mequoda’s team members last year, they were eager to cooperate and help Mequoda help DARK.

The journalists at DARK are extremely expert in this specialized field, producing pieces of 300-1,000 words for the website, on top of the print product, The DARK Report.

One of Mequoda’s newest websites, launched last November, is the Remonsy ETF Network, whose name is an acronym for Retirement Money System. Rather than having a team of journalists, Remonsy’s founder and investment guru Tom Vaughan pores out advice every day. He acknowledges that he’d rather juggle numbers than words, but his readership expands daily because just like any trained journalist, Vaughan is dedicated to spreading information he thinks is valuable to the reading public.

Remonsy, like all the new journalistic online ventures, is a startup without a legacy print publication behind it. Another Mequoda client who went this route is Vida y Salud, which launched in 2009 and is today the largest Spanish-speaking health information website in the world.

Vida won the Mequoda Rocket Award in 2010 with traffic growth of – are you sitting down? – 715%. When they won the award again in 2012, they’d slowed down to a mere 105% growth rate. All of this success has led them to recently launch a companion website in English, the Latina Health Letter. Vida delivers a lot of original content from co-founder Dra. Aliza Lifshitz, but also aggregates content from distinguished contributors such as Harvard Health Publications and the Mayo Clinic.

Altogether, health journalism is clearly a powerful force on the Internet, and since business news, animals and tech news are already well-funded endeavors, we wouldn’t be surprised to hear any day now of someone launching a health website with millions in angel investments – to be used to pay editors and writers, of course.

We hope you, our readers in niche publishing, take heart and inspiration from the investing world’s new appreciation for what you do, even if there’s no venture round in your future.

If there is, of course, we’d love to hear from you. And do you think journalism as a business model is here to stay?