Evaluating Risks and Embracing Change: How the Forward-Looking Management of Mother Earth News is Transforming a Traditional Print Magazine Publisher Into a Cutting-Edge, Online Information Provider

If your magazine and the brand it represents have survived and grown for 35 years, you might be tempted to rest on your laurels. “If it ain’t broke…” But smart publishers recognize that both the market and the medium are constantly evolving. The Internet forever changed the way thinking people consume information. It also presented new challenges and opportunities to savvy publishers and marketers.

Ogden Publications, based in Topeka, Kansas, publishes more than a dozen magazines and books for people interested in self-sufficiency, sustainability, rural lifestyles and farm memorabilia. Its flagship is Mother Earth News, where much of the content is devoted to “doing more with less, creating great communities, living wisely and all facets of the joyful good life!” With the creation of a network of websites and a bold vision for the future of its publishing enterprise, Ogden has embarked on a new direction for the Mother Earth brand that will redefine “creating great communities.” 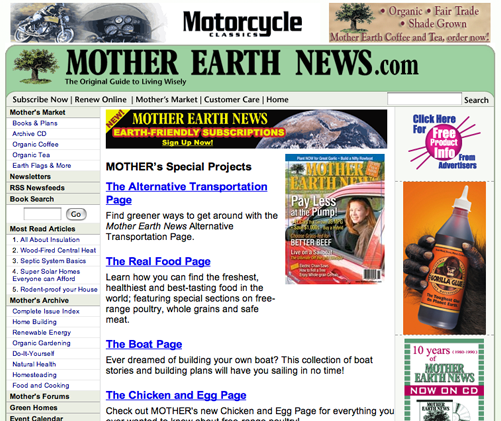 Mother Earth News is a bimonthly magazine dedicated to presenting information that helps its readers become more self-sufficient, financially independent and environmentally aware. Readership age ranges from the early teens to 90-plus, with a mix of brand-new readers and others who have been subscribers for decades. The magazine has a paid circulation of approximately 350,000 and is read by nearly a million people across the United States and Canada.

Since 1970, Mother Earth News has been an exemplary source of information about sustainable homesteading, rural skills, environmental consciousness, real food and natural health. It is North America’s leading publication for people interested in contemporary rural lifestyles.

Interest in these topics is increasing as Americans enter the second half of the decade and the oldest Baby Boomers approach retirement age. Many are searching for this information online.

In response, the management of Mother Earth News is developing new information products and expanding its reach on the Internet. According to Bryan Welch, publisher and general manager of Ogden Publications, the evolution of the magazine’s online efforts started in earnest in 1997 as they began to digitize and archive previously published content.

This is his story, as he related it to an audience of publishing executives at Mequoda Summit.

When Ogden acquired Mother Earth News, it took possession of nearly 30 years of previously published articles. In its first online marketing effort, the company repackaged the content on compact discs (CDs), bundling 10 years of back issues on each CD. It also added all the archived stories to its website.

“We talked about not putting the content online because we were going to try to sell CDs, but not having any idea how this business worked— not having any idea what we were doing—we decided to do both and see what happened,” said Welch. “The CDs sold like hotcakes, and traffic on the website went way up, so we decided to keep doing both. And so far, it’s a good business plan.”

Since its fledgling start, the Mother Earth News website has added books and construction plans, organic coffee and tea, coffee mugs and assorted collectibles to its product mix. Under consideration are photographs, prints and posters, as well as video clips and 130 audio recordings of old Mother Earth News radio programs that ran on public radio stations in the 1970s.

Next, the publisher added Google AdSense to the Mother Earth News website.

“We just basically turned this Google thing on and every month it gets about 40 percent larger,” said Welch.

Then, the company decided it needed to optimize its website for the search engines, so it invested $5,000 in training from a search engine optimization (SEO) specialist. The results were dramatic.

“You all know what sort of expenses you have to put against that $7,000 a month don’t you? Nothing. Zero. Nada. That’s $7,000 that traveled rapidly and directly to the bottom line,” Welch said.

A New Business Model is Preceded By a Shift in Thinking

At this point, the management of Mother Earth News began to think of themselves as not just magazine publishers, but as online information providers.

“What we’ve done is, not taken our business into the Internet,” Welch explained. “In essence, we launched a new business that’s Internet-based, utilizing a set of resources that we already had at hand.

“It was very, very hard for us to visualize this. We kept thinking that all of our love and dedication and affection were invested in magazine publishing, and in the magazines we published. And a lot of the decisions we made about how these websites looked, how they worked, how we interacted with them, required that we put distance between ourselves and our old ways of defining our identity and our product.”

At first, the changes were particularly difficult for some Mother Earth News editors, but now they are generally supportive, Welch said.

The Mother Earth Wiki is Born

“The most controversial thing that we’ve done in terms of the editors, and really the hardest thing for us to get our minds around, is we’ve taken all this content and loaded it into the Wiki environment, which gives us an interactive encyclopedia.

“Here comes the tricky part,” Welch said. “It’s interactive. We are going to put it out on the Internet and let people interact with it, modify it and change it. So from another perspective, this is by far the hardest piece of information to swallow.”

The Mother Earth Library will be a separate website that includes 35 years of content from the Mother Earth News magazine. With the power of the Internet and cutting-edge Wiki software, the Library will bring together a community of conscientious citizens. Anyone can participate in expanding and updating the entries on wise living.

Site visitors are invited to be volunteer editors and update the articles. Anyone who registers for the site can use the Mother Earth Library to learn about sustainable living topics by perusing thousands of articles or by asking questions of the experts on its discussion pages. Site users who have personal experience or knowledge about sustainable living can add their own information to enrich the many entries, or enter new wise living topics.

A New Interactive Medium and the Risks of Change

Bryan Welch is a thoughtful publisher with extraordinary business acumen. He has carefully considered the changes his company is making, and he knows they are not without risk. He is both philosophical and practical.

“What happens after you go on the Internet and you really have this huge palette to paint on? And you can scramble it in all these ways, interactively, and let other people chime in and interact with you and change your product?

When built out, the Mother Earth websites will comprise a Mequoda Website Network that includes:

“This is the Internet. Is all that money wasted and all that time wasted a huge tragedy, with great mountains of unsold magazines plowed into a landfill somewhere? No, we change it and move forward.”