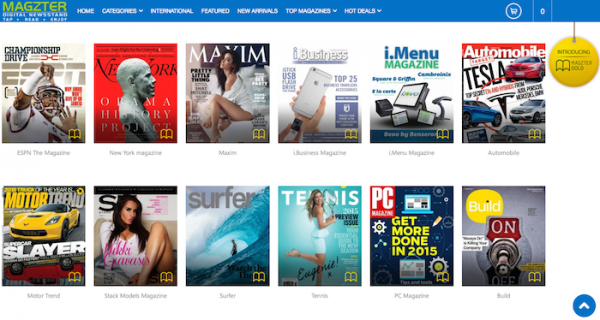 Magzter, the magazine subscription site offering thousands of titles, announced the debut of Magzter Gold on Monday, January 19. The service takes “all you can read magazines” up a notch, offering two tiers of unlimited access.

Magzter Gold will charge $9.99 a month for content from more than 2,000 magazines – including international publications – as well as a $4.99 option (Magzter Gold Lite) allowing readers to select five titles that they can switch up at the end of each billing period, according to Talking New Media.

Magzter – a forerunner in the industry sector commonly referred to as “Netflix for magazines” that also includes Next Issue and Zinio – reports that they currently have 24 million users. In a boost for multiplatform publishing, Magzter Gold’s content is available across tablet, mobile, and web.

In addition, for niche publishers, this “all you can read” magazines model covers all content categories, from the most popular titles to digital magazines on specific interest areas and hobbies. Magzter has also updated its user interface to improve content discovery, integrating the ability to algorithmically tailor the experience for  users based on their interests and interactions with in-app content. The interface also allows users to download multiple titles simultaneously and five times faster than before, according to Magzter, reducing “speed-to-read” times and making access easier than ever.

“With thousands of titles available, content discovery is a huge benefit of the digital reading experience on Magzter. To take full advantage of that, we’ve built a leading-edge recommendation engine to power the back-end of our new user interface. With it, we can identify the reading habits of our users and then recommend titles based on engagement, all in real-time. It’s the most intuitive interface in our category,” President and Co-Founder Vijay Radhakrishnan said in a statement.

“The ‘all-you-can-read’ model is a natural progression for digital reading. Movies and music have already adapted to it and we’re bringing that to the magazine experience. But this is only the first step – we plan on expanding into other areas to make digital reading even more convenient and accessible for millions of existing and potential new users worldwide.”

Magzter says that this will be just one move of many in 2015. The company plans to introduce books to its offerings this year, as well. Magzter is a free download on Apple iOS, Android (Google Play), Windows 8, the web, the Amazon App Store, and Kindle Fire.

As D.B. Hebbard writes in Talking New Media, the jury is still out on how strongly readers will respond to such services, but they do present another attractive option for publishers looking for alternatives and upgrades to traditional digital newsstands. Hebbard notes two criticisms historically associated with the “all you can read” magazines model: low return per subscriber attained on the publisher side and quality of experience on the reader side, the latter due to the proliferation of replicas.

What do you think of the “all you can read” magazines model? Have you tried any other options? Let us know in the comments!

To read more about Magzter’s new service for “all you can read” magazines, visit Talking New Media.

I believe most people have a core set of magazines they value and are passionate about. The “All You can Read” model doesn’t fit for me. I rather subscribe to my top 5 most important titles and leave it at that.