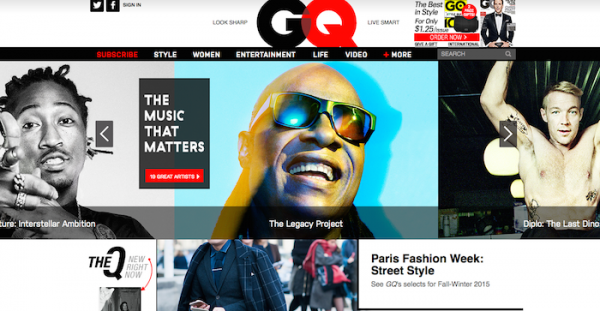 Howard Mittman has emerged as Condé Nast’s fixer, as the former Wired publisher is now trying his hand at another of their brands – this time, with a heavy emphasis on GQ digital efforts.

Doing the same with GQ digital revenue might be a tougher task, but at the same time, the latter’s longtime and loyal audience – and more defined image – could make appealing to online ad buyers that much easier, Digiday reports.

Mittman has integrated 18 products into the GQ digital array during his first few months as publisher, with a concentration on social media impact, as well as audience and ad targeting.

“I’m here to do at GQ what I did at Wired,” Mittman told Lucia Moses. He was hired as publisher in September of 2014.

“I’ve heard a tremendous amount around GQ as a brand. It means something in the greater lexicon of what it means to be an American male. What I do think we need to do a better job of across the publishing community is roll out low-cost, easily implementable solutions. The mantra I hear most often from advertisers is, when they look at their ad partners, they’re increasingly getting frustrated with the scattershot approach.”

Meanwhile, half of GQ digital traffic is on mobile, where lower ad rates could cause problems for Mittman’s plan of attack.

“I won’t pretend that anyone has figured it out, and we’re no different. Fat fingers still drive a lot of clicks. Still, nothing stands out.”

Here are some of those solutions Mittman is implementing at GQ digital:

A proprietary platform created by Ars Technica, the Accelerator is already in use by The New Yorker, Vanity Fair, Glamour, and Wired. It uses an algorithm gauging visits, shares, and traffic origins to anticipate when a particular piece of content might transcend expected unique views and go viral. Once it does, the platform lines up a pre-purchased ad – by the likes of Porsche, LG, Motorola, HBO, Microsoft, who were among the first to have bought in – alongside of it.

Visitors who have searched for a keyword related to a GQ digital advertiser will be presented with an ad from that company.

Weirdly enough, exactly what it sounds like: The example Digiday uses is a reader receiving ads for umbrellas if the forecast in the area calls for rain.

This feature, brought over by Mittman from Wired, allows advertisers to tailor ads to visitors based on which social platform delivered them.

Clients who have already signed on to Mittman’s new suite of products include Burberry and Mr Porter, Digiday reports.

What’s your outlook for Howard Mittman’s GQ digital strategy? Let us know in the comments!

To read more about the GQ digital shift, visit Digiday.