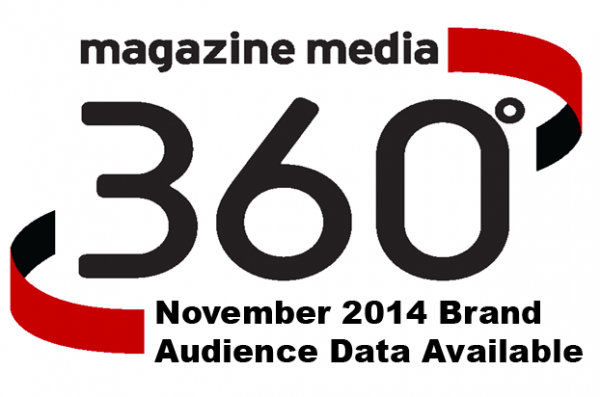 The Association of Magazine Media (MPA) released its “Top 10” magazine brands on Jan. 7, along with its most current industry numbers from November of 2014. The findings, compiled by recently created MPA metrics arm Magazine Media 360°, are encouraging.

The Audience Report charted a 9.3% year-over-year increase in site visits, while putting gross traffic for digital magazines at 1.6 billion. The MPA attributed the surge to significant growth in mobile and video, up 76% and 68%, respectively, over 2013. Print+digital editions, as well as desktop/laptop showed little movement.

“We couldn’t be more pleased that The Magazine Media 360° Brand Audience Report is becoming a trusted source of insight and information, particularly among advertisers. The ad community has quickly begun to recognize this metric as a valuable tool that measures consumer demand across platforms, which is exactly the way they are buying our content today.”

Print+Digital: The unduplicated estimate of average issue readers, in thousands

Desktop/Laptop: The number of uniques, in thousands, that have visited a website on a desktop or laptop at least once in the specified reporting period

Mobile: The number of uniques, in thousands, that have visited a website via mobile device – including iOS and Android – at least one time during the reporting period

Video: Unique viewers, in thousands, who watched a video at least once during the reporting period via a player owned/operated by the publisher – regardless of where that video was viewed – and/or, if reported, through a separate, clearly branded channel.

Mobile: Playboy, In Touch, All You, Harper’s Bazaar, Runner’s World

What are your impressions of the MPA’s methodologies and findings? Let us know in the comments!

To read more about the top magazine brands and other data from Magazine Media 360°’s Audience Report, visit the MPA.