In our eyes, there are two digital magazine publishing software giants: Adobe and Mag+. When we work with publishers developing digital magazine apps for tablets, we recommend Mag+, a spin-out company that sprung from Bonnier Corp.’s very early Popular Science app.

We find Mag+’s digital magazine publishing software feature set and functionality are similar to Adobe, and also support our best practices such as content reflow and including HTML links and other interactive features. And Mag+ is simply more affordable for small publishers, both the base price and the entitlement price for downloading issues to clients’ subscribers.

But when you’re developing a digital magazine app for a tablet, there are a few drawbacks:

These restrictions look a lot like a physical magazine, don’t they? 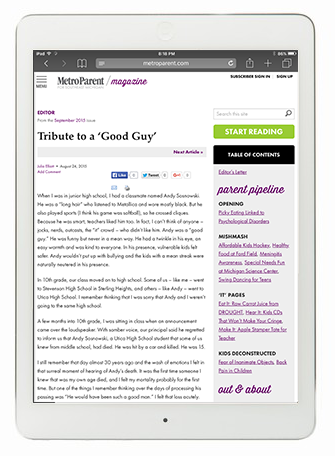 We find that the best way to add benefits to your magazine, while defeating these restrictions, is to create a web magazine.

A web magazine is developed in HTML and resides on your website behind a paywall. It may look and act very much like an application, however there’s nothing to download, and it’s not in the app store, it’s hosted on your website.

It’s designed so that a table of contents is consistently present on the right or left side of the page, 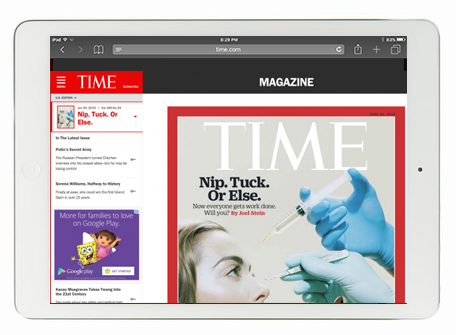 so that when a user reads each article they can hop around, just like in a digital magazine app.

All of your content, by nature, is behind a paywall when you have a web magazine. The user logs in to access their digital edition, and has access to old issues through the same login.

Not to mention, when the content lives on the web, and not in the app, that sponsored content can be promoted in social media, so you can add social media marketing to your ad packages.

When we analyzed the likes and gripes of digital magazine users, we found usability and availablility as the two biggest issues. People want to read a magazine like they read a magazine. They want interactive features, like better ads that engage them, and videos embedded in content. They want to bookmark content to save for later. They want to increase the font size when they need to. And they want to be able to find their favorite magazines on whatever device they have, whereas most publishers stop at an iPad edition, or an Android edition for their magazine app.

By developing a web magazine, you can offer subscribers all of that, and you’re not limited to your digital magazine software when it comes to functionality and interactive elements you want to add.

A web magazine gives you so many opportunities for experimentation and growth, whereas a digital magazine app needs to be redeveloped from month to month, limits your revenue opportunities, and basically puts your magazine in a box.

But the reality is your customers want both. And just to be clear, the best magazine publishing strategy is one that encompasses print, apps, AND web. You don’t need to pick just one.

What do you think about web magazines versus magazine apps?  Leave a comment and let’s discuss!

Thanks for the article. You make a number of good points but how much of a web magazine is completely downloadable and totally readable offline, as these are key benefits of an app. Logins and passwords would also seem to be a detriment to the web model.

While both web magazines and app based magazines have their advantages and disadvantages, our comments are based on the performance we’ve seen measured by sales, usage, and renewals. Any publisher who has both types of digital editions will tell you that the web edition is the winner on all counts. Thus the real conundrum is the fact that while more than 5000 magazines are now available as apps, less than 500 produce web-based magazines. We simply encourage publishers to embrace print, apps, AND web.