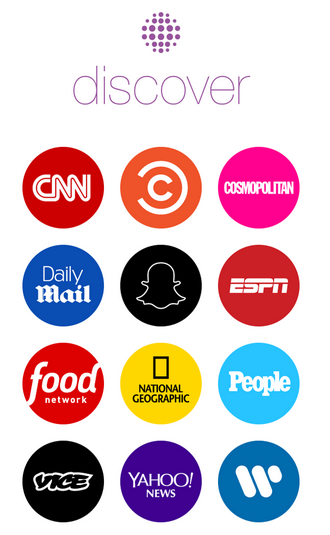 With the launch of Discover, publishing brands on Snapchat will try to capitalize on a new ad-based content channel

Social media for publishers can be a fast-moving, occasionally confusing gambit. While there’s no question that integrating a social strategy will generate more readers and revenue, there are questions about where to start. Well, brace yourself for another one: When will you join other brands on Snapchat?

We put stories in quotes here because, as “Snaps,” they take on a quirky identity with this social network: They last for just 24 hours on the interface, can be viewed for only one to 10 seconds, and disappear after the user has viewed them. A crucial caveat for publishers, however, is that they can link to longer content, whether verbal or video.

While Discover is currently limited to a select group of “media partners,” there’s nothing stopping other publishers from joining Snapchat to bulk up their social media strategy and tactics. With few exceptions, any platform’s a worthy platform when considering a multiplatform publishing approach.

Brands on Snapchat have the increasingly fleeting and valuable advantage of going where the audience is, as Joshua Benton recently pointed out in a Nieman Lab post.

“These are not newspaper stories or TV pieces stuffed awkwardly into new containers. The ‘Snap’ formatting – framed vertically like your phone, constructed as a single view, intermixing audiovisual elements, swipes to move between them – echoes what people see in their friends’ messages,” Benton writes.

“It’s completely and utterly mobile; there is no web-native equivalent, and there likely never will be. The updated-once-a-day model makes the news contained, something you can finish. Constructing these snaps probably takes some producer a little time (I don’t know what native tools Snapchat is providing them, if any), but the effort pays off.”

Here are how some publishing brands on Snapchat are making that effort, from an Adweek piece last week:

CNN will send out six Snaps daily at 5pm, Eastern time, Adweek reports. These will be a photo- and video-based, with the final Snap featuring trivia-type material. A newly formed staff will handle the customized content, which CNN hopes will lower their average audience age – currently in the 30s, while Snapchat users are far younger. BMW will be CNN’s first Snapchat Discover sponsor.

Cosmopolitan has been aggressive on the multimedia front during the past year, and its video channel has seen success. Expect more with their Snapchat channel. Their aim is “snackable items” to whet users’ appetites for the magazine’s features and videos, according to Adweek. Sperry and Victoria’s Secret have signed on as sponsors.

“We view it as a completely different channel,” North American CEO Jon Steinberg told Adweek. “The whole site is one never-ending experiment from how to change the headlines and to how to change the photographs. We’ll get the statistics from Snapchat and see the forms and styles that people like.”

Vice’s recent mobile push and younger audience puts them in a good position for Snapchat success: They’ll curate “best-of” content from their 10 verticals every day.

Heard much about Snapchat? Planning to use it if you’re not already? Let us know in the comments!

To read more about publishing brands on Snapchat, visit Adweek and the Nieman Lab.