When thinking about the various magazine editions available to you, which of the following 3 options is the most important? 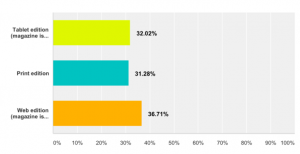 Does the fact that these formats are neck and neck reflect a healthy publishing industry? We believe so.

As we revealed last week in releasing our 2015 Digital Magazine Market Study, consumption of digital magazines overall has now reached 43% of print magazine consumption and is climbing rapidly. Readers want more content in more ways – they want options, and they’re willing to pay for quality.

More and more, a multiplatform approach is appealing to publishers. Recently, Tyler Schulze, Senior Vice President of Enterprise at The Enthusiast Network, told MinOnline that his company is ramping up its diverse content offerings, an effort that aims to please both readers and advertisers, but shifts the emphasis from an ad-dependent model to one that creates direct revenue streams from consumers.

“Our goal has really been to become the first legacy magazine publisher to really make the full transition to be a multimedia content creation company, in all forms of distribution. So we have been reorganizing the entire company around high growth areas, digital video, websites, mobile and social. We have made some pretty substantial investments and continue to grow staff in those areas in line with the revenue growth trajectory. So the answer is yes, we’re accelerating our own transition here by reinvesting in the areas that are going to take us into the future,” Schulze told Kelsey Lundstrom.

“We’re expecting that over 40% of our revenue this year will be from non-print sources and this number continues to grow. Like I said, we feel like we’re significantly ahead of most traditional publishing companies in making that transition to true diversification of revenue sources and of note—digital, video and experiential marketing continue to be growth areas for us where we see a lot of opportunity and we’re getting a lot of nice wind in all of those spaces. If we’re at 40% today, I think we’ll be eclipsing 50% in the next couple of years.”