Digital magazine spending sees explosion in 2013 – and beyond 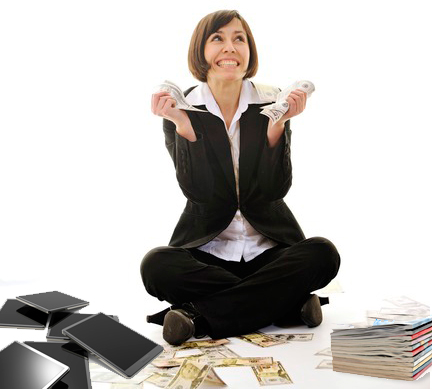 The Internet is swimming in articles and blogs in which pundits opine that the tablet revolution isn’t that big a deal for the magazine industry. Nothing to see here, they say. Move along. One blogger even cites one of our very own tablet study statistics – that only 26% of tablet users prefer digital to print magazines – as proof that the tablet is merely a flash in the pan.

These folks say things like “The industry’s digital revenues, while fast growing, are just 5% of the total” and “Hearst boasts of reaching 87 million Americans each year, making the 800 thousand [digital subscriptions] worth only about 1% of their reach.” The emphasis in these statements is mine.

We’re not Eeyore here at Mequoda, and we’d like to take another look at the data. Of course, I welcome your thoughts on this debate in the comments below. Do you believe that the tablet’s contribution to magazine publishing is meaningful and long-term? Here’s my take:

In the first place, the tablet sales on which digital magazines depend, while always healthy, couldn’t exactly be called a revolution until fairly recently. In 2010, 18 million tablets were shipped globally. For 2012, that number is 122.3 million.

Second, publishers are only just starting to develop functional, user-friendly apps. Let’s remember that those who started right out of the gate in 2010 had nothing to guide them, and early apps were clumsy and hard to read. The best app we’ve ever seen is Forbes, and that was only launched in January of this year. Forbes openly states that executives wanted to take their time in building a powerful app, instead of guessing. Surprise – it takes time and patience to find out what makes a great app!

So let’s take a closer look at where digital magazines are right now, and where the experts think they’re going, rather than where they’ve been.  We think you’re going to see the numbers I’m about to toss out and call your IT team for an app development meeting pronto.

As the 2013 Mequoda Tablet Study shows, a whopping 55% of Internet users own or have access to a tablet. That’s a radically higher number than you read in most accounts, because we know that many families share a tablet. Focusing on ownership gives you a much smaller number – 22% at Pew, 19% at Forrester, for example – and is not an accurate representation of tablet penetration.

Our access figure is 2.5 times higher than Forrester’s ownership figure. And Forrester projects that ownership by 2016 will reach 34.3% in the U.S and 30.4% in Europe – so we can speculate that access in those years will be 86% and 76%, respectively.

What’s more, 6% of tablet users in our study read digital magazines daily, and 23% do it monthly.  And while it’s true that only 26% of respondents said they prefer digital to print magazines, we believe that’s a pretty big number for a medium that didn’t exist at all three years ago, and only became sophisticated and user-friendly in the past six months.

Those revenue totals I mentioned above don’t look so impressive to the pundits. PricewaterhouseCoopers estimates that by 2015, revenues from digital circulation will increase to $611 million, but observers don’t think this will offset declines in advertising revenue. More gloom and doom!

But given the recent explosion in tablet ownership and access, and the amount of money we now know those users are willing to spend on content, we think the future looks a lot brighter than those observers do.

In our survey, 55% of our respondents say they own or have access to a tablet, and 13% say they bought a single-copy digital magazine (7%) or subscription (6%) in the last 30 days. We did the math, based on 55% of US adults having access to the Internet and a tablet, and assuming an average digital subscription price of $19.97 per year, and an average digital single-copy price of $4.97. What we came up with will astound you:

And this all comes in a market that didn’t even exist three years ago! Why shouldn’t digital publishers be excited about that kind of spending?

While some pundits bemoan the “1%” of publishing revenues that derive from digital editions, others are more enthusiastic. As Godengo/Texterity noted in a Nov. 12, 2012 survey, a full 12% of total revenues for publishers is digital revenue. The B2B segment attributes the largest percentage of revenue to digital (16%), but consumer publications, at 14%, are close behind, the survey finds.

Case in point: Biblical Archaeology Review, the publication from the non-profit Biblical Archaeology Society, is seeing impressive results after launching its digital magazine last September. In those first few months, BAR digital contributed a full 6% of 2012 revenues. And we can happily report today that Q1 2013 results show that that figure has doubled to 12%.

This is really not as surprising as it sounds. As the Wall Street Journal’s MarketWatch writes, “Recent figures from market researcher IDC Corp. and digital-publishing-software maker Adobe Inc. indicate readership of digital magazines is climbing and the time readers spend with these digital editions is on the rise, thanks to the proliferation of tablet computers.

“ ‘Our average publisher is seeing 85% growth in readership in the past six months,” said Lynly Schambers-Lenox, marketing manager of Adobe’s digital-publishing-suite of software. “We think the proliferation of devices is driving that increase.’ ”

Perhaps those gloomy industry observers are using bad data. MPA CEO Mary Berner notes that while digital editions still make up a small percent of overall circulation, only 65 percent of magazines report their digital statistics to the Association for Audited Media, the database used by pundits to make their predictions.

And AAM itself reported in February that the number of US magazines sold on tablets and other mobile platforms in the second half of 2012 more than doubled from the same period in 2011. There are 289 titles with digital editions audited by AAM, which saw 7.9 million sales, up from 3.2 million in the same period a year earlier.

Finally, as I noted in another post, digital leader Condé Nast is finding that its tablet subscribers (including those who are tablet-plus-print subscribers) are renewing their subscriptions at a higher rate than print-only subscribers – and they’re also paying higher prices for their renewal subscriptions.

You can see the glass as half empty if you choose – and I invite you to speak your mind below – but our clients are getting the advice that we’re offering here: Go digital, or go home. Print will never recover completely. And with growing readership and longer time spent with tablet content, advertisers are bound to discover you sooner rather than later – and for more money, too.

In short, you certainly want to get a piece of that $3 billion action, and it would be foolish to overlook it because some folks want to create controversy where it doesn’t exist.