How Bonnier, Popular Science and the Economist are pioneering new digital advertising rates, programs and formats

Competition for those precious tablet advertising dollars – to replace declining print dollars – is heating up. The MPA reported in January that for the full year 2013, tablet magazine advertising units increased 16% with print pages essentially flat at -0.2%.

It’s encouraging that a few more companies are buying tablet magazine ads. And the disparity between the increase in brands willing to jump into tablet advertising and the increase in digital ad volume is what tells us how fierce the competition for those advertisers is about to get.

But if you know the digital magazine advertising strategies that will win advertisers’ hearts and dollars, you can make some serious money over the course of the next few years as tablet penetration continues to rise: to 46% of the U.S. population, according to Kantar.

One publisher in particular is determined to lead the way in digital magazine advertising strategies – indeed, in digital publishing technology itself. Here are some of their secrets, along with a tip from another of our favorite magazines.

Bonnier Corp., publisher of dozens of titles including Popular Science, was the first magazine publisher to leap into the tablet revolution and also the first to offer digital subscriptions instead of single copies, and clearly takes its role as a technology leader seriously.

Bonnier’s credentials also include the creation of the popular digital magazine platform Mag+ (a Mequoda partner), which was spun out of Bonnier’s very early research and development into tablet publishing.

Lately, Popular Science has been leveraging its audience’s scientific interest by inventing some very creative uses of their tablet technology in advertising. PopSci’s digital magazine advertising strategies focus on interactivity, which just happens to be the hottest trend in advertising, according to Kantar.

And when we reviewed the PopSci iPad edition, we discovered that the magazine was way out in front of other publishers in the use of interactive advertising.

“This is a competitive advantage,” says Bonnier Senior Consumer Marketing Director Bob Cohn of his interactive digital magazine advertising strategies. “We don’t have the deep budgets of Condé Nast or Hearst, so we’re trying to be out of the box and push them. We want to be the leader in technology.”

So as brands are increasingly drawn to interactive advertising, Bonnier and PopSci’s’s innovation is already providing a “good steady revenue channel” and helping it compete with the big guys. And it’s not just the “coolness factor” of interactivity that woos advertisers, says Cohn.

With interactive technology in a digital magazine, “engagement, time spent, and retention all go way up,” he notes. And those enhancements, of course, are exactly the things digital advertisers are seeking.

In fact, if digital magazine advertising strategies were a poker game, Bonnier has called and raised the stakes exponentially. Tap to interact? Embedded video? That’s just everyday advertising for Bonnier.

What’s the premium advertising position in a print magazine? The back cover, of course. The only spot that could outdo it in terms of eyeballs would be the front cover – and in most cases you can’t sell advertising on your cover.

Ah, but you can if it’s a digital magazine – because it doesn’t have to stay there forever. Every single time you “open” a recent PopSci iPad issue, you’re greeted with a full-page video ad for Goodyear tires, which, after a few energizing scenes of tire performance, ends with a banner ad across the middle of the cover and an invitation to “double tap to enter issue.”

No matter how many times you “open” your issue, there’s Goodyear! Once you double tap, the ad disappears and you can enjoy an ad-free cover and start reading your magazine.

The digital bellyband is the product of regular Bonnier marketing brainstorming sessions. Originally, the advertising sales team began offering the radical idea to potential advertisers with rough sketches … which did not impress. Finally, says Cohn, the company found a small company to produce a live demo – the same team produces actual ads once they’re sold – and found that advertisers were much more receptive.

Knowing how this would have played out with an editorial team in print days, we asked if there has been any pushback from PopSci editors. Cohn says he hasn’t heard of any, and in fact, editors tend to enjoy having additional revenues to help support the technology they want to use in the magazine. 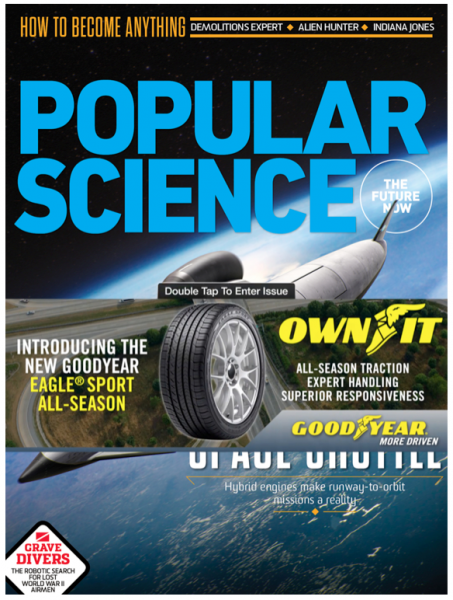 As exciting as we think vertical reflow (also called vertical swipe) is for editorial content, we hadn’t given it much thought in terms of advertising. Luckily, the PopSci marketing team did, and camera company Sigma for one is a buyer. Sigma starts with a full-page ad for a line of cameras and invites readers to swipe to learn more.

Following that page are pages devoted to specific cameras in the line plus a stunning photo taken with each camera. All together there are seven full pages flowed vertically in the Sigma ad. 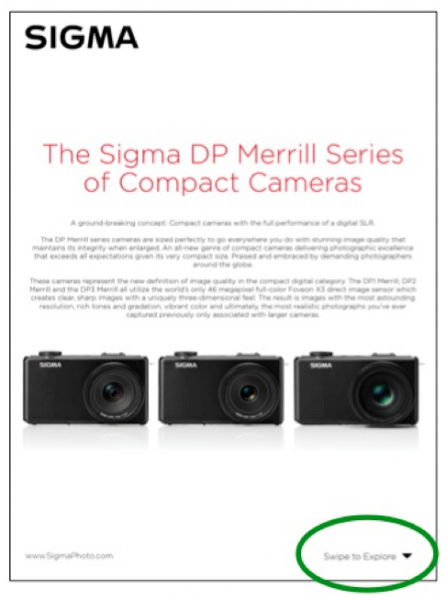 Sigma and its vertical swipe ads don’t just stop at Popular Science. All the big camera companies advertise in another Bonnier title, Popular Photography. This is one of the cases where a smaller, niche publication – which just happens to be the largest in its niche – finds that its advertisers are anxious to make an impression and willing to spend on the technology to do it.

That leads them to 3D ads, in which the product seems to come right out of the tablet and rotate – rather like technology seen in a Star Trek movie. A demo video created to sell the concept to advertisers demonstrates how it works.

Bonnier has figured out a way to sell advertising and to address the problem of keeping readers engaged more than once a month when an issue is published. Popular Science: The Future Now is a sponsored free app that Cohn describes as a “fancy RSS feed.” It includes plenty of updated content to keep PopSci junkies happy, and features many references to the sponsor, app producer Zumobi. 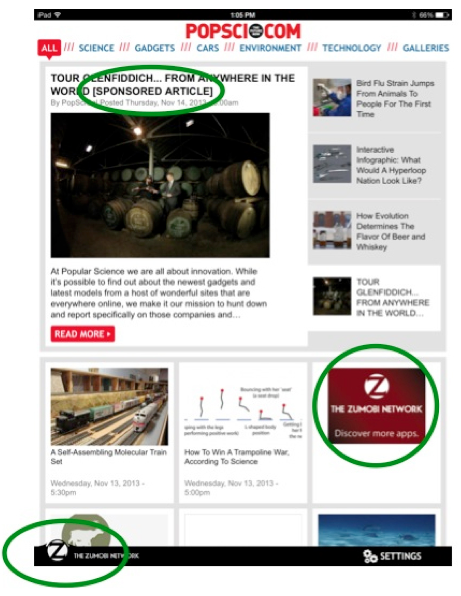 Bonnier doesn’t have a monopoly on creative digital ads. Global engineering and electronics giant Siemens offered a fun idea in a September issue of The Economist – which is intriguing coming from what most people would consider a fairly stodgy German company.

Much like the old direct mail trick of asking subscribers to move a sticker from one piece of paper to another, Siemens offers a clever engagement device with the tablet technology available to it. The tablet user sees a black page but is invited to “Swipe here to create energy.” The more the user swipes, the more the ad itself comes into view, until you see a Siemens ad that the user has “created.” 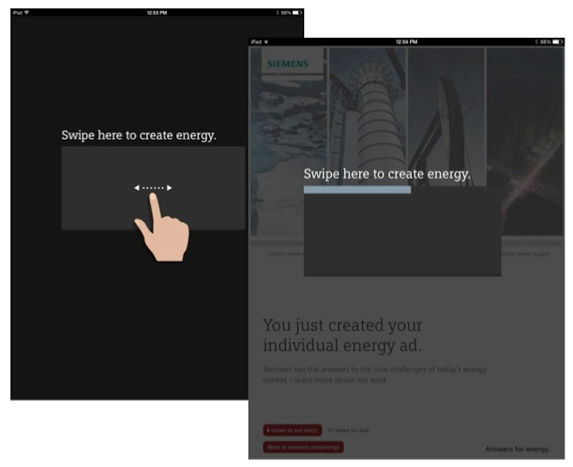 Digital advertising rates ‘all over the map’

All of these things are pretty darned exciting for the magazine industry. But, as we’ve noted in the past, the digital magazine advertising strategies revolution is taking shape rather slowly. Observers attribute this to a number of factors, including cost, the complicated creative involved, lack of standardized metrics and difficulties in explaining the new technologies and their advantages to advertisers.

Indeed, at an MPA seminar on digital magazine advertising strategies, a media agency representative noted that her company’s clients are primarily concerned about scale – how many of a print title’s total subscribers are actually subscribing to the digital version – cost, and metrics.

Digital advertising rates tend to be a well-kept secret thus far. Bonnier sells each ad as a fixed price special project, rather than guaranteeing certain metrics and setting CPM rates. And Megan Doherty, VP and Director for Print at media agency BPN, admits that rates are “all over the map,” but adds that her advice to publishers is to start with a CPM rate similar to their print rates, and increase the rate for every interactive element that’s added.

Forbes, another of Mequoda’s most well-regarded publications, offered a complex rate card for 12 different types of ads, and charged on a CPM basis, in 2013. This year, it no longer publishes separate rates for digital ads.

Publishing giant Hearst keeps its digital advertising rates a secret from the general public. At Condé Nast, companies must run a print ad to get into a tablet edition. There is then a fee for inserting a digital ad on top of the print price, on a sliding scale based on the complexity of the technology desired.

In short, digital advertising rates are a work in progress around the industry, and are still awaiting standardized metrics and rates.

No one can really pin down what kind of advertisers are more likely to buy digital magazine ads. So far, the only common denominator seems to be the size of the ad budget – which is no doubt why Kantar’s research identifies the top tablet advertisers to be, among others, GEICO, Pantene Pro-V (Proctor & Gamble), Microsoft and ATT.

Doherty also notes that clients who seem to be more inclined to try interactive advertising are often non-U.S. companies, such as Korean Airlines and Hyundai Motors.

Cohn agrees that it’s tricky to identify the advertisers who will be most responsive to digital advertising, but Bonnier isn’t shy about trying.

“We lead off every sales call with digital opportunities,” he reports. Some advertisers say no immediately, others are intrigued but never follow through – and some jump in wholeheartedly. Interestingly, he adds, “It tends to be the kind of thing where the most interest is from the advertiser, rather than the ad agency.”

What’s more, Bonnier has found that being able to pitch innovative new digital opportunities gets its sales team through doors that would have been closed to them in the past, and they also find themselves talking to more senior executive than before.

“We position ourselves as their partner in helping them try something new,” says Cohn.

Bonnier reminds its advertisers that the fixed price they propose is a “drop in the bucket” as a percentage of their total ad budget, and which will deliver the added benefit of learning something new and attracting a lot of eyeballs.

Bonnier doesn’t guarantee a specific number of eyeballs, however. Recognizing that standardized metrics are still up in the air, they instead report statistics to clients such as how much time is spent on their ads, how many people clicked on a link, or how many viewed video – as a post-publication report.

Bonnier, not surprisingly, is also at the forefront of the current movement to establish the standardized metrics that advertisers are demanding. Its research director serves on the steering committee for the MPA’s advertising metrics project, and Bonnier also reports its data to AAM’s Consolidated Media Report, the only tool at the audit giant where magazines can combine data from all of their platforms for buyers to access.

With all of this going on, it’s not surprising that even with its commitment to leading the industry in technological advances, Bonnier finds digital revolution just as bewildering as the rest of us do. Says Cohn, “I tell my staff it’s like the wild, wild west – it’s fun, but every three months it’s different.”

What do you think of the future of digital advertising and the wild, wild west? What are your own digital magazine advertising strategies? Have you seen any innovations that we should check out? Please let us know in the comments!