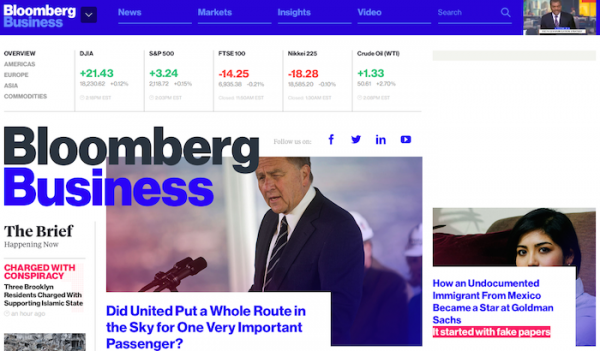 After turning Atlantic Media into a global force to be reckoned with, Justin Smith – more than one year into his tenure and months into a radical redesign – now has his sights set on Bloomberg digital reigning supreme.

Capital New York reports that Bloomberg has seen significant increases in uniques, views, and time spent on its properties. While reviews the publisher’s redesign has been polarizing, one unifying theme has emerged: People are reading. A lot. (And you can read a lot more of our coverage of Bloomberg digital.)

So, how did Smith grow and engage Bloomberg’s digital audience in a relatively short time?

By launching an effort to expand the Bloomberg brand umbrella and disrupt the business news status quo, according to his fascinating and wide-ranging interview with Newsonomics author Ken Doctor.

“We’re likely to launch a markets, luxury and a tech brand. Each is intended to disrupt existing incumbents in their respective businesses. … We have bigger ambitions—a portfolio of multiplatform brands living under the flagship Bloomberg Business brand,” Smith told Doctor.

“It’s historic. The window is a couple of years. We can grab as many business decision-making eyeballs while people are reconsidering their brand favorites and platform favorites. … We are going to gather data on what people read, what industry they are in, what their content interests are. We are going to be serving content consistent with their past behavior and anticipated needs.”

The key to Smith’s plan is diversifying the Bloomberg digital content offerings (which in large part will be up to new Editor in Chief John Micklethwait), while maintaining a flagship. For Mequoda Members, the flagship would be a portal channeling visitors to the platforms they seek. And so it is with Bloomberg, which aims to ramp up its video offerings via Bloomberg TV to overtake CNBC, better integrate its political and tech coverage, and capitalize on Millennials and mobile, Doctor reports.

In his analysis, Doctor divides Bloomberg’s competitors into two groups: the legacy publishers (The Financial Times, Fortune, and The Wall Street Journal) and the popular news sites (Business Insider, Forbes, and Yahoo).

Based on audience data from comScore, here’s where Bloomberg currently falls among business sites for January of 2015 (this list doesn’t include Quartz, which Doctor points out is another competitor whose traffic is counted in another category).

Here’s where Bloomberg digital wants to be: No. 1.

How will they get there? The same way you will in your niche: smart multiplatform tactics, including listings, email newsletters, sponsored content, events, white papers, books, podcasts, and more.

Ready to take advantage of the window of opportunity Justin Smith describes in his comments about the Bloomberg digital grand plan? Download our free Multiplatform Publishing Strategy Handbook.